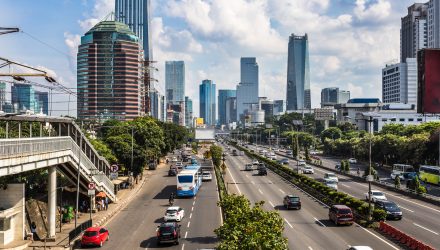 Indonesia country-specific ETFs plunged Wednesday on an intensifying rout in the emerging markets, with Indonesia’s equity market experiencing its worst sell-off in almost two years, forcing authorities to step in to support its local currency and debt markets.

President Joko Widodo blamed “a barrage of external factors” for the rupiah currency’s depreciation to 20-year lows and argued for an immediate increase in investment and exports to contain the current account deficit, Reuters reports.

“There are only two key (things) – investments must continue to increase and exports must also increase so (we) can resolve the current account deficit,” Widodo said in comments posted on the cabinet secretary’s web page.

Bank Indonesia (BI) warned that while Indonesia’s current account deficit was 1.7% of gross domestic product last year, it is expected to widen to 2.5% in 2018.

The southeast Asian market was pummeled especially hard as investors exited emerging markets, due to the country’s perceived vulnerability from its reliance on global trade with its current account deficit and need to import oil. For instance, Rob Carnell, head of research for Asia at ING, argued Indonesia is the most obvious target to dump in Asia during an emerging-market selloff because of the country’s dollar debts and its current-account deficit, the Wall Street Journal reports.