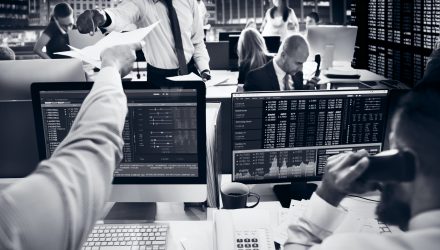 After struggling for some time now, the S&P 500 finally broke through its intraday all-time high, only to drop precipitously in the moments after, as investors are still cautious about the economy and the concerned about the long-term fallout from the ongoing coronavirus pandemic.

Stock indexes and index ETF are mixed on Tuesday after witnessing the S&P 500 drive through a historic intraday high shortly after the open, passing the old February 19th high of 3393.52. While the index broke to new ground by just a point or so, the new level was soundly rejected, and the index dropped about 1% from its new high before attempting to regain the level as of noon EST.

The S&P 500 advanced 0.2% along with the Nasdaq Composite which rallied 0.52%, aided by slight gains in tech shares. Meanwhile, the Dow Jones Industrial Average is underperforming its fellow indices, dropping 0.12%.

The major stock index ETFs are trading mixed to higher along with their underlying benchmarks Tuesday. The  Invesco QQQ Trust (QQQ) and SPDR S&P 500 ETF Trust (SPY), are both showing moderate gains while the SPDR Dow Jones Industrial Average ETF (DIA) has declined slightly, down 0.13%.

“It’s like the messenger from Marathon who crumples from exhaustion after the long run,” Sam Stovall at CFRA Research said of the S&P 500.

Stovall explained that after such a significant event, investors should prepare for some modest profit-taking.

While the messenger from that story is well-known to have died, Stovall doesn’t expect that to happen:  “No bull market has ever fallen immediately into a new bear market,” he told me.  “They typically fall into a pullback or a correction [a 10% decline]”, noting that the average decline after a new high was 8%.

Of course, anything is possible, as it has been a year of unexpected surprises, where markets drove right into a bull market after plummeting from the February highs, for the fastest recovery time in history. It was the shortest bear market since 1929, lasting just 33 calendar days.

Stovall, however, along with Goldman Sachs’ David Kostin, projects the S&P will finish out the year higher, but with a warning:  “We need upward revisions to third and fourth quarter earnings to justify these valuations,” he told me.