You are at:Home»Equity ETFs»In the Know: An ETF Blueprint for Q4 and Beyond 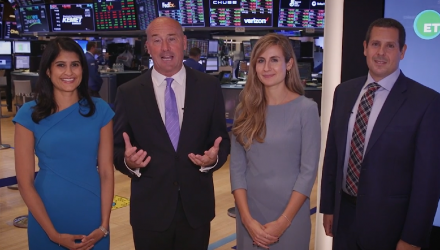 In the Know: An ETF Blueprint for Q4 and Beyond

When the smoke cleared from the previous month’s volatility, October 2018 was one to forget for U.S. equities thanks to the fire sale in the technology sector, in particular, as declines in FANG (Facebook, Amazon, Netflix, Google-Alphabet) stocks roiled the major indexes. The Nasdaq Composite, in particular, stumbled by 9.2% in October, making it its second largest decline since it fell 10.8% back in November 2008.

After 10 years of market recovery from the Great Recession followed by a historical bull market run, October left investors scratching their heads and wondering whether to sit on the sidelines or stay invested. In the latest update of “In The Know,” three experts provided a blueprint that could serve investors in the final quarter of 2018 and beyond––Yasmin Dahya, Head of Americas Beta Specialists at JP Morgan Asset Management; Samantha Azzarello, Global Market Strategist at JP Morgan ETFs; and Douglas Yones, Head of Exchange Traded Products at NYSE.

Be Resilient and Stay Invested

Investors who were resilient during the Great Recession were treated to the S&P 500 becoming the longest bull market in history. It underscores the old adage of “good things come to those who wait,” but in terms of investments, “returns come to those who stay invested.”

After October’s volatility, fear-riddled investors might be hesitant to jump into the capital markets due to being late to the extended bull run party. However, Azzarello prognosticates that there’s still time to capitalize on opportunities.

Rising interest rates may also be fueling investor fear of the capital markets as last month, the Federal Reserve raised the federal funds rate by 25 basis points–the third rate hike this year on the tailwinds of strong economic data. The latest sell-offs in October have been partly blamed on rising rates, causing investors to fret over whether they should stay on the sidelines.

While investors typically shift from U.S. equities to the safer confines of government debt, rising rates could also be worrying investors in conjunction with inflation that could tamp down returns from fixed-income assets. However, Azzarello views this as a blessing in disguise.

“Rates going up is a good thing,” Azzarello said. “I know it doesn’t feel that way when fixed-income returns are going negative. However, at some point, we are going to benefit from some more income in the fixed-income market and it’s something that just has to happen.”

While the temptation to stay in cash is alluring with factors at play affecting both stocks and bonds, Azzarello recommends that investors tell their clients to stay invested.

“They key thing would be we want to always continually get and stay invested,” said Azzarello. “And there’s ways to do that which make sense after a 10-year bull (market) so this doesn’t have to be cash on the sidelines or all into the market.”

Hop Back on the Value Train

Everybody loves a comeback and though the FANG (Facebook, Amazon, Netflix, Google) stocks have been largely attributed to helping fuel the decade-long bull run, the growth and momentum strategies they’ve been associated with may be falling out of favor amid October’s sell-off. However, one factor may be experiencing a resurgence—value.

Dahya points out that value is especially attractive given their deep discounts while growth and momentum were soaking up the limelight of the bull run.

“I think there’s one factor right that I think is quite attractive to us, which is the value factor,” said Dahya. “If you think about value, it’s going through its second worst underperformance since 1990—it’s been very painful for value investors, but what that has meant is two standard deviations cheap and that level of cheapness has historically been associated with 14% return for the next 12 months.”

To Dahya, being invested in value right now will allow investors to capture the upswings that can come hard and fast.

“The way it (value) performs is like a coil spring,” cited Dahya. “The returns in value come in very short periods of time. What that means is you really want to be in the factor even though it’s down to catch that upswing.”

“One of the most interesting things to me in the ETF market is that there are now products coming to the market where you can take advantage of themes like that,” Dahya added.

In fact, JP Morgan has the JPMorgan Event Driven ETF (NYSEArca: JPED) that exposes investors to specific events, such as mergers, acquisitions and share buybacks. JPED seeks to achieve its investment objective by employing an event-driven investment strategy, primarily investing in companies that the firm believes will be impacted by pending or anticipated corporate or special situation events based on a systematic investment process.

Get Exposed to the International Markets

The U.S. stock market has been the default play for investors even as the bull market heads out of the latter stages of its market cycle, but when the well runs dry, it could be opportunities abroad that could get the lion’s share of investor capital. Emerging markets, in particular, have been marred by the trade wars between the U.S and China, causing a negative ripple effect into emerging market ETFs.

While the majority of investors might be driven away by the red prices in emerging markets, they should see them as substantial markdowns, especially if trade negotiations between the U.S. and China result into something materially positive.