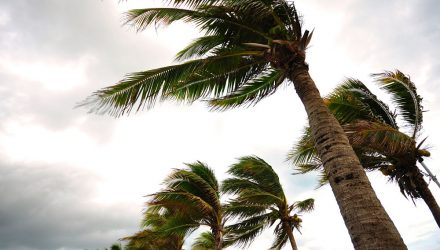 Already struggling, oil exchange traded products, such as the United States Oil Fund (NYSEArca: USO), which tracks West Texas Intermediate crude oil futures, face new hurdles thanks to Hurricane Irma. The hurricane is expected to make landfall in Florida this weekend and some experts believe the storm could be upgraded to a devastating category five hurricane.

That could plague already tepid oil demand. While the Organization of Petroleum Exporting Countries have moved to cut production, expectations of continued U.S. shale production remain a deterring factor. Nevertheless, recent U.S. inventory drawdowns, which if sustained, could support the current price levels.

“The disruptions of more than 4 million barrels per day of refining capacity have been cut in half, with major refineries restarting operations in Corpus Christi and Houston,” reports OilPrice.com. “ExxonMobil is ramping up operations at its Baytown facility, the second largest in the country. Valero Energy brought two refineries in Corpus Christi and Texas City back online, with another large one in Port Arthur scheduled to resume operations soon.”

Still, Hurricane Irma could be problematic on the demand side for oil, particularly if the storm intensifies in the coming days.

“If that were to occur, Irma’s effects on the energy sector would be felt pretty much only on the demand side of the equation. Florida has little to no supply-side infrastructure – negligible levels of oil production and refining capacity,” according to OilPrice. “There is a very remote chance it will travel into the Gulf of Mexico, which would have huge implications for the region’s offshore production – most weather models have the hurricane shifting north up along the East Coast.”