You are at:Home»Equity ETFs»How ETF Traders Are Repositioning After August Selling 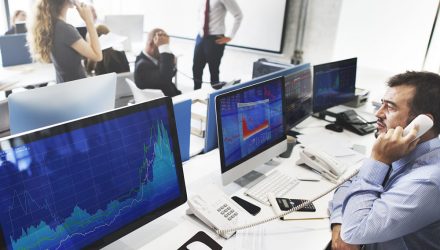 How ETF Traders Are Repositioning After August Selling

U.S. markets were destabilized in August after pushing toward record highs as a bout of political risks abroad and at home caused many traders to sell and lock in recent gains. Meanwhile, exchange traded fund seemed to have viewed the recently selling as a short-term event, funneling billions back into to big, stable equity plays.

The SPDR S&P 500 ETF (NYSEARCA: SPY) remained the most popular play over August, attracting $3.7 billion in net inflows, according to XTF data. The popular S&P 500 ETF play has been a go-to for institutional-level investors seeking to quickly go in and out of the market as SPY has consistently shown low bid-ask spreads, even in face of high volume trades.

The broad iShares Core U.S. Aggregate Bond ETF (NYSEArca: AGG) was the only popular fixed-income play that ranked among the top 10 over August, bringing in $1.1 billion in new money.