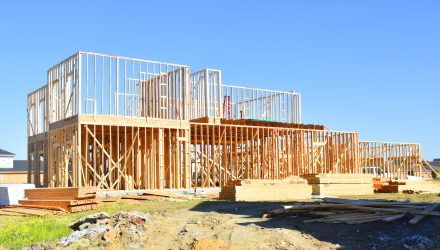 With bonds spiking sharply as stocks plummeted, the average rate on the widely viewed 30-year fixed mortgage hit 2.97% Thursday, according to Mortgage News Daily, helping homebuilder ETFs in the process.

Mortgage refinancing and borrowing candidates were pleasantly surprised to discover that for top-tier borrowers, with excellent credit and meeting other various criteria, some lenders were quoting as low as 2.75%. Lower-tier borrowers would see steeper rates, accordingly.
It was just last week that bonds seemed to be seeking, resulting in a corresponding jump in yields.

“This is a very abrupt and arguably unexpected change given that last week looked like a potentially scary lift-off for rates after an extended stay near the previous all-time lows,” said Matthew Graham, chief operating officer at Mortgage News Daily. “It suggests we shouldn’t count out the ability of interest rates to maintain these levels (or improve upon them) even if the economy continues showing signs of healing.”

Rates have been floating above 3% for a good part of May and only snapped that trend last week, following a shockingly more optimistic May employment report, and cities across the country reopening, which prompted additional selling in the bond market.

Interest rates also benefited from an announcement by the Federal Reserve on Wednesday that it would continue buying mortgage-backed bonds, providing continued liquidity.

“I think rate levels will be directly tied to the ability of the economy to recover. If it goes better than expected, rates would rise, and vice versa if things remain sluggish. Either way, the Fed is committed to keeping shorter-term rates lower for longer, and that will help to anchor longer-term rates like mortgages to some extent,” added Graham.

Low rates have aided in a quick recovery in the housing market, especially for homebuilders. Homebuilder ETFs like the Direxion Daily Homebuilders and Supplies Bull and Bear 3X Shares (NYSEArca: NAIL) are benefiting as well, with the fund gaining 2.48% Friday. Mortgage applications to purchase a home also climbed 13% annually last week, according to the Mortgage Bankers Association.

Lower mortgage rates could continue to give the housing market a much-needed boost, which could translate to more strength for homebuilders. Rising rates, low affordability and rising homebuilder costs due to tariffs have been thorns in the side for the housing market.