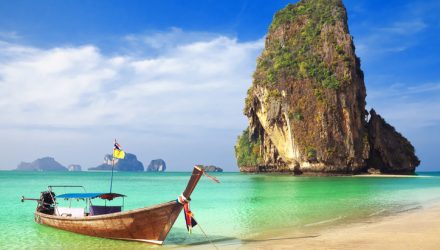 Political risk has riled markets, but in the case of Thailand, Thai markets and country-specific ETF has rallied after the former prime minister absconded before potentially receiving a 10-year prison sentence.

The iShares MSCI Thailand Capped ETF (NYSEArca: THD) has gained 5.7% over the past month and increased 18.4% year-to-date.

Thailand’s equity market has rallied since late-August to four year highs, with the SET benchmark positioned to potentially break above the record set at the start of 1994, the Wall Street Journal reports.

Further strengthening the market outlook, the baht currency has appreciated 7.5% against the dollar this year and is among the best performing Asian currency.

“Anyone that has traded Thailand for any length of time is all but immune to political risk,” Andrew Bresler, deputy head of sales trading for Asia-Pacific at Saxo, told the WSJ.

The Southeast Asian country has been ruled by a military junta since then-Prime Minister Yingluck Shinawatra’s government was ousted in 2014. Elections scheduled next year are another point of interest for investors.