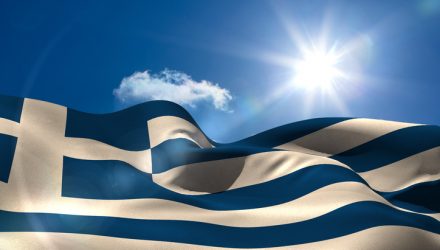 The Global X MSCI Greece ETF (NYSEArca: GREK) is one of this year’s best-performing single-country exchange traded funds is with a gain of 32.5%. Improving economic fundamentals in Greece underscore why the country’s equity market is performing so well.

“Fitch Ratings has upgraded Greece’s Long-Term Foreign-Currency Issuer Default Ratings (IDR) to ‘B-‘ from ‘CCC’. The Outlooks are Positive,” said Fitch Ratings in a recent note.

“Fitch believes that general government debt sustainability will steadily improve, underpinned by on-going compliance with the terms of the European Stability Mechanism (ESM) programme, and reduced political risk, sustained GDP growth and additional fiscal measures legislated to take effect through 2020. The successful completion of the second review of Greece’s ESM programme reduces risks that the economic recovery will be undermined by a hit to confidence or by the government building up arrears with the private sector,” according to Fitch.