Good News For This Mining ETF
You are at:Home»Equity ETFs»Good News for Copper Mining ETF 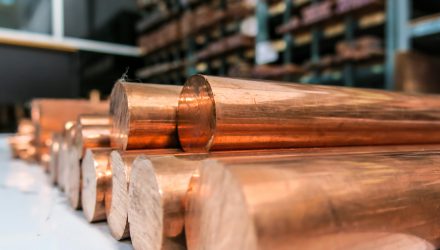 With the iPath Bloomberg Copper Subindex Total Return ETN (NYSEArca: JJC) up about 25% year-to-date, it is reasonable to expect that copper mining equities would be performing well, too. Indeed that is the case. Just look at the Global X Copper Miners ETF (NYSEARCA: COPX). That ETF is up nearly 32% this year.

Importantly, some data points suggest COPX and copper mining equities could continue delivering upside next year. In recent years, copper producers have been paring production, which could create tighter supply as demand rebounds. That would further boost prices.

COPX, which tracks the Solactive Global Copper Miners Index, held 27 stocks at the end of the third quarter. Canadian stocks account for 30.6% of the ETF’s weight with Australia chiming in at 12.3%. Chile, the world’s largest copper producer, is the sixth-largest geographic weight in COPX at just over 5%.

“After struggling with falling copper prices since 2011, producers of the red metal are finally recording profits thanks to this year’s upswing. And, according to analysts at S&P Global Market Intelligence, the miners’ profit margins are set to grow further in 2018,” reports Mining.com. “As of October 30, prices for the industrial had increased 24% since the start of the year and by 58% since the lowest price seen in recent history — $1.96 a pound in January 2016.”