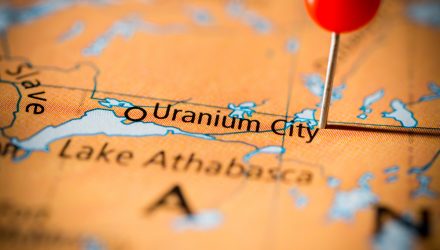 Canadian Investors Should Give Uranium a Closer Look

The fund is a relatively new kid on the block, launching just last month. Nonetheless, it made a big splash by boasting over $600 million in assets from its inception.

“We’re very excited to be adding the new uranium trust to our lineup of physical commodity funds. We’ve been interested in uranium for several years and we’re very happy that we received overwhelming shareholder support on our acquisition of Uranium Participation Corporation,” said Sprott CEO John Ciampaglia during an appearance on Sprott Talk Radio.

While the fund is listed on the Toronto Stock Exchange, that doesn’t mean that U.S. investors will be left out in the cold.

“Sprott Physical Uranium Trust will be listed on the Toronto Stock Exchange,” Ciampagiia noted. “The tickers will be U.UN in Canadian dollars. For the first time, we are offering a U.S. dollar purchase option to investors and the ticker for that will be U.U. We’re excited about adding that new purchase option for U.S. investors.”

A Nuclear Option in the Energy Sector

While electricity, particularly when it comes to vehicles, might grab the most attention, nuclear can’t be discounted as a compelling option.

“Renewables are a great way of generating electricity, but we’re going to need baseload energy and that’s traditionally where we’ve seen the use of fossil fuels, like coal, oil and gas,” said Per Jander, Technical Advisor to the Sprott Physical Uranium Trust. “They emit greenhouse gases, but with nuclear energy the emissions are very low or none. Nuclear energy has some emissions over the lifecycle view from cradle to grave, but the power stations themselves are zero emissions.”

While nuclear energy might draw its fair share of skeptics given certain high-profile incidents, that shouldn’t be the main disqualification criteria for its use as a renewable energy source.

“I think much of the stigma around nuclear energy comes from the Cold War days,” Per Jander said. “There was a movement in Sweden called The Movement Against Nuclear Energy and Nuclear Weapons. They put them in the same sentence implying a connection between the two and that’s what makes people worried about it or afraid of it. In my view, there is no connection. Civilian nuclear energy is completely different from the military aspect of things.”