You are at:Home»Gold & Silver Investing Channel»Sprott Gold Talk Radio Looks Back to the End of Bretton Woods 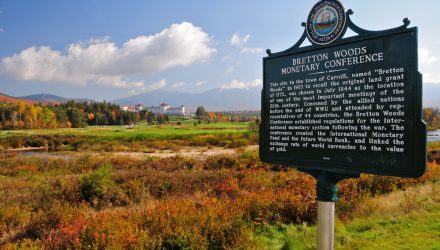 On August 15th, 1971, Richard Nixon ended the Bretton Woods agreement by suspending the convertibility of the U.S. dollar into gold. As the world passes the 50th anniversary of this historic event, Sprott Gold Talk Radio host Ed Coyne discussed its ongoing implications for the financial markets today with Jim Grant of Grant’s Interest Rate Observer.

In July 1944, representatives from 44 countries met in Bretton Woods, New Hampshire to establish an efficient foreign exchange system in an effort to promote international economic growth with an eye toward a post-war world of prosperity. This agreement created the IMF and the World Bank. The architect of the agreement was none other than the famous economist John Maynard Keynes. Fifty years later, Richard Nixon would decouple the U.S. dollar from gold.

In talking about the immediate fallout of Nixon’s decision, Grant said that “the effect over the next 10 years was great inflation that ripped and finally ended in the double digits and the ascension to the chairmanship of the Fed of Paul A. Volcker, to a brutal regime of towering interest rates and a deep recession. And then decades and decades of paper money, with which we live today.”

America was losing gold to other countries, including France. The U.S. was emitting more dollars than it could possibly earn, and it lacked the gold supply to redeem those dollars. In the years leading up to Nixon’s decision, Grant points out that America made many attempts to seek out alternate solutions. “We helped us set up something called the London Gold Pool, which tried to manipulate the gold price lower in free-market trading. We implemented something called Operation Twist, which jiggered interest rates to attract overseas dollar deposits by lifting short rates. We imposed quotas, and the president lectured us on the patriotic duty of not to travel abroad. All these things, all these shifting makeshift devices were unsuccessful, as of course they would be in postponing what was in fact the necessary culmination of a constellation of economic facts.”

Many believed that Nixon had no choice but to take this action, though others think it was a political stunt to get re-elected. “You know, a proper gold standard is all about the subordination of domestic considerations to the exchange rate, to the integrity of the currency as defined by its inviolable right of convertibility… Gold, as my friend Lewis Lehrman says, is the least imperfect monetary medium, but it is now out of the limelight, having been shoved aside by cryptocurrencies.”

Host Ed Coyne added that “Cryptocurrencies, in general, continue to grab the headlines along with Modern Monetary Theory… We really don’t know what all these different policies are going to do to our overall economy, whether it’s from an inflation standpoint, from a k-shaped recovery of squeezing out, as you talk about in your most recent letter, the middle class. I think I read there that the middle class has gone from 61% down to 51%, and effectively, the middle class is our economy. Those are some problems that are byproducts of whether what we did 50 years ago or what we’re doing today.”

The two also discuss how the inflation of the 1970s was largely due to the decoupling of the dollar from gold.

According to Grant: ”Over the sweep of a reasonable investment horizon, [gold]  protects against the depredations of the stewards of our currencies. That’s what its purpose is.”

The robust discussion also hit on gold’s value today, and its place in any reasonable investor’s portfolio. Grant opined that at “$1,800 an ounce; I would say that it’s relatively cheap compared to the monetary risk that our central bankers are presenting to us with suppressed interest rates and with the unending spinning of money through this thing we call quantitative easing.”