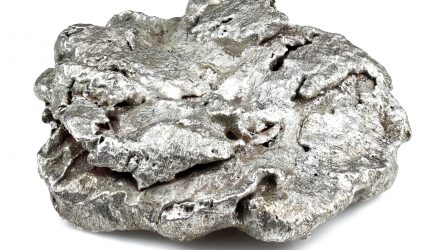 Silver Surges for Third Day Amid Geopolitical and Inflationary Concerns

Silver futures and ETFs are making big strides for the third consecutive day after robust moves in both gold and silver this week, thanks to concerns about how the Fed will respond to inflationary pressures and rising Treasury yields.

“Gold has been largely ignoring the inflation data and instead focusing on how the [Federal Reserve] might respond to those data,” said Peter Grant, vice president, senior metals strategist at Zaner Metals.

Gold and to some extent silver are often thought to serve as a hedge against inflation.

While gold is still trading largely within its range for the last 10 months, up $30 Wednesday to $1848 per ounce, silver is rapidly approaching the highs of November, adding over 2% on Thursday, to trade at $24.75 an ounce, and may be leading the charge.

Silver may be spearheading the move higher in metals “as pandemic-related growth concerns ease, which is just going to further stoke inflation,” said Grant.

There was positive news for ETF investors this week as well, as a report revealed that the surge in gold prices on Wednesday corresponded with a significant inflow of $305 million into the SPDR Gold Shares ETF (GLD) on Wednesday. The report said that this was the largest money inflow into a gold ETF since November.

This inflow into GLD also supports the idea that traders and investors are vexed by rapidly climbing and potentially problematic inflation, and are looking for protection.

“March silver futures bulls have the overall near-term technical advantage. Prices are in a five-week-old uptrend on the daily bar chart. Silver bulls’ next upside price objective is closing prices above solid technical resistance at $25.00 an ounce. The next downside price objective for the bears is closing prices below solid support at the January low of $21.945. First resistance is seen at the overnight high of $24.325 and then at $24.50. Next support is seen at $24.00 and then at $23.48,” writes Kitco analyst Jim Wyckoff.

“We’re long silver from $22.81. Silver is breaking out, $23.47 last, up about 55 cents or 2.29 percent. There was a major reversal in silver this morning. Interest rates going up is not bearish for precious metals. In December 2016 the Fed raised rates and gold hit $1517 by July. We have been in a correction since August 2020, but now we have a huge bottom. This is just the beginning of a major rally to test the previous highs around $30. Silver is frustrating to trade. If you have been carrying silver since March 2020, it has been a challenge. But we are on the verge of a major move up. Interest rates going up is going to put a bottom in the precious metals markets. Silver has broken out of the daily VC PMI levels and is now heading for the weekly target of $23.99,” reports seekingalpha.com.

Spiking inflationary data is also contributing to risk-off sentiment in the marketplace, something that typically supports precious metals, and data is already pricing in additional rate hikes as well as an increasing likelihood that central banks will tighten monetary policy.

“Given the calls for even more rate hikes this year than markets are pricing in, not to mention larger individual increases than we’ve seen for many years, perhaps we are seeing some inflation hedging from traders that don’t think central banks are doing enough to bring price pressures down,” said OANDA senior market analyst Craig Erlam.

Geopolitical concerns may also be beneficial for precious metals as investors become more leery about a Russian invasion. The move higher in gold and silver coincided with the Biden administration promulgating an additional $200 million in defensive military support to Ukraine, referencing worries of a Russian invasion.

“I was looking for headlines and data releases that coincided with the gold surge this morning. I can’t help but think that there is increased concern around what’s happening with Russia and Ukraine. This morning, we got the news that the United States released $200 million in military aid to Ukraine. And this follows on with reports over the weekend that the U.K. was providing military assistance to Ukraine. It’s just like a perfect mix here for gold prices in the very short term,” DailyFX senior strategist Christopher Vecchio told Kitco News.

Nevertheless, for gold at least, the gains might be ephemeral according to Vecchio, especially given rising Treasury yields and a hawkish Federal Reserve.

“I don’t necessarily have a lot of faith in this move higher,” Vecchio said. “We’ve seen U.S. treasury yields, both nominally and in real terms, move significantly higher here at the start of 2022. Historically speaking, when real yields go up, gold prices tend to go down. And we have an environment defined by tightening monetary policy and a reduction in inflation measures over the course of this year. It suggests that real yields will continue to move higher. And so I don’t have a lot of faith in gold’s move up here today.”

Given its industrial use and value in renewable energy processes, Vecchio sees a potentially brighter future for silver, however. “Demand for silver has a real economic use relative to gold,” Vecchio said. But there is strong resistance at $24.90, and traders are likely to take profits at those levels in the short term, he added.

An option for investors who also want to add silver to their portfolio mix along with gold is the Sprott Physical Gold and Silver Trust (CEF). CEF is a closed-end trust that invests in unencumbered and fully-allocated physical gold and silver bullion in London Good Delivery bar form.

The goal of CEF is to provide a secure, convenient, and exchange-traded investment alternative for investors who want to hold physical gold and silver without the inconvenience that is typical of a direct investment in physical bullion.

Another way for investors to get exposure to silver is via the Sprott Physical Silver Trust (PSLV). PSLV is a closed-end fund that lets investors redeem large blocks of shares in exchange for delivery of silver bullion.

PSLV often trades at a premium to net asset value (NAV). Closed-end funds can see large premiums and discounts, while ETFs have an arbitrage feature that tends to keep prices much more in line. However, PSLV does possess some unique benefits.

SIVR, which is up over almost 2% Thursday, uses a physically-backed methodology, an idea that was popularized by ETFs due to investors growing tired of the complexities of futures contracts and the dangers that are associated with them. By using this physically-backed strategy, this fund can eliminate the issues of contango and backwardation and give investors more realistic pricing of the metal it holds.

Finally, the ProShares Ultra Silver ETF (AGQ) and the Invesco DB Silver Fund (DBS) are two other funds that focus on the silver market.