You are at:Home»Gold & Silver Investing Channel»It Pays To Go For Gold: Economic Gains for Olympic Medalists 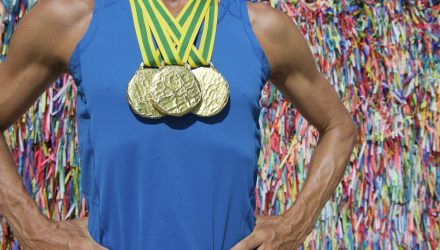 It Pays To Go For Gold: Economic Gains for Olympic Medalists

According to data from a recent CNBC article, the endless training and physical/mental taxation of preparing for the Olympics could literally pay off if athletes go for gold.

Obviously, the aim for any competing athlete is to sit at the highest level of an Olympic podium, but medal bonuses for all three—gold, silver, bronze—can be had based on CNBC’s table below, which is broken down by country:

One might think that economic powerhouses like Japan or the United States might pay their athletes more, but the table shows that simply isn’t the case. Singapore and Kazakhstan, which pay the most for medalists, don’t even crack the top 25 economies in the world.

The reason lies in the monetary influence of government or lack thereof in countries like the U.S. Private sector revenue is responsible for driving the U.S. sporting economy, the CNBC article noted.

“The sporting economy in the U.S. allows athletes to better monetize their talents as most of it is driven by the private sector, according to Unmish Parthasarathi, founder and executive director at consulting firm Picture Board Partners,” the article said, “In places like Singapore, India and elsewhere, many of the national sporting initiatives are driven by governments that sometimes use higher monetary rewards to encourage a growing sporting culture, he told CNBC.”

If they prove they are the best of the best by winning medals, there are ways for athletes to capitalize on their brand as a walking/talking endorsement.

“Beyond receiving monetary and non-monetary rewards from their countries for winning medals, Olympians rely on other revenue streams for their sporting endeavors,” the CNBC article added. “Athletes from bigger, more competitive countries receive stipends or training grants from their national sports associations. Top performers collect prize money by winning national and international tournaments. Others draw regular salary by holding a variety of jobs.”

In the meantime, the rest of us watching the Olympics in the comfort of our own homes can grab gold in other ways. One way is via exchange traded funds (ETFs) like the Sprott Junior Gold Miners ETF (SGDJ).

SGDJ seeks investment results that correspond to the performance of its underlying index, the Solactive Junior Gold Miners Custom Factor Index. The index aims to track the performance of “junior” gold companies primarily located in the U.S., Canada, and Australia whose common stock, American Depositary Receipts (ADRs), or Global Depositary Receipts (GDRs) are traded on a regulated stock exchange in the form of shares tradeable for foreign investors without any restrictions.