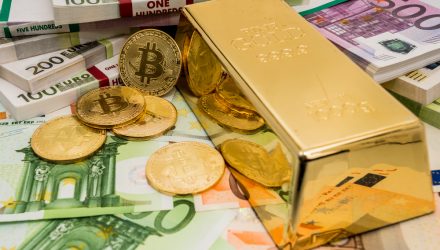 Is Gold Underperforming Compared to Other Commodities?

Gold has been performing well, with its price slowly grinding upward, but many investors find it lacking compared to other commodities.

Wells Fargo’s head of real asset strategy John LaForge notes in a Kitco article, “Since moving to favorable on March 4, 2020, gold prices have gone up 17%, while the Bloomberg Commodity Total Return Index has gained 77%. In our view, the performance difference is more about the average commodity performing unusually well than about gold prices performing poorly.”

Rather than being viewed as underperforming compared to other commodities, LaForge sees gold as potentially being the next big play. The poor performance of stocks, geopolitical turmoil, and a dire inflation crisis are setting the stage for gold to have explosive performance in the coming months and years.

Gold and Bitcoin Battle to Be Store of Value King

“On the store-of-value front, bitcoin has been getting much of the attention lately, but we think gold may be the next play. Gold’s price chart appears to be slowly grinding higher, while bitcoin’s price has been stuck in a wide $30K to $69K range for the past 12 months,” LaForge writes in a note, eyeing a $2,100 end-of-year price for the yellow metal.

Unlike bitcoin, gold can be physically held and has a universally acknowledged history of being a store of value. It is also a significantly less volatile asset. While bitcoin’s price has been vacillating wildly, gold’s price has slowly and steadily improved.

Additionally, the fundamentals for gold point to a major rally coming down the pike. “Supply is dropping below the five-year average, which has been a bullish sign for gold prices historically. Historically, each time this has happened, a multi-year gold price rally followed,” LaForge says. “Clearly, there is no guarantee that this will happen again, but we like the odds that it might.”