You are at:Home»Gold & Silver Investing Channel»Growing Silver Demand Shaping Up Nicely for the PSLV ETF 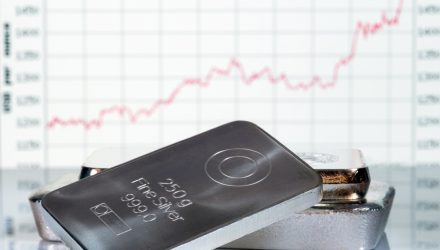 Growing Silver Demand Shaping Up Nicely for the PSLV ETF

Silver prices and assets like the Sprott Physical Silver Trust (NYSEArca: PSLV) generated buzz as short squeeze targets earlier this month. However, that scenario is fading, providing investors with a clearer picture of silver fundamentals.

The outlook is encouraging and that could lure more investors to PSLV, which is one of the more compelling silver funds on the market today.

“Global demand for silver will rise to 1.025 billion ounces in 2021, its highest in eight years, as investors and industry ramp up purchases, the Silver Institute said on Wednesday, predicting that prices would rise,” reports Reuters. “The coronavirus outbreak triggered a rush among investors to stockpile silver, which like gold is traditionally seen as a safe place to store money.”

PSLV “provides investors with exposure to physical silver at a time when demand is high, causing excessive premiums for coins and bars,” according to Sprott.

Metals investors are invigorated by news that Treasury Secretary Janet Yellen asked Congress to pass President Biden’s stimulus plan this weekend, suggesting that the results of the bill could include the U.S. gaining full employment by next year.

“Silver is also used in industries such as electronics and solar panels, and demand will rise as the pandemic is brought under control and the global economy rebounds, the institute said,” according to Reuters. “Industrial demand will rise 9% from 2020 to a four-year high of 510 million ounces, it said.”

Goldman Sachs analysts, in a research report published earlier this month, restated its bullish stance for silver, projecting prices to climb as high as $33 an ounce as President Biden pushes onward with a plan to augment alternative renewable energy production.

“On the supply side, mine production should rise to 866 million ounces this year, the most since 2016, as disruption caused by the pandemic recedes, and recycled supply will increase for a fifth year, the institute said,” reports Reuters. “The market will be slightly oversupplied, its sixth consecutive annual surplus, the institute said. It calculates its supply-demand balance without counting ETFs.”