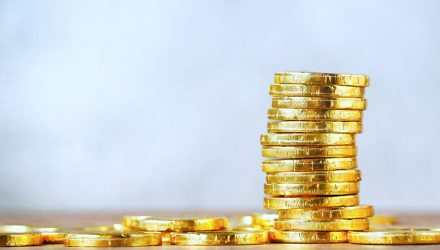 Government bond yields have been rising steadily for the past three months, but they went parabolic in February, surging over 31%. The yield on the 10-year Treasury touched 1.6% last Thursday, up from 0.9% just a couple of months ago. That’s more than a two standard deviation move, suggesting the bond selloff may be overdone. Remember, bond yields rise as prices fall.

Yields have jumped so much, in fact, that they’re giving stocks a serious run for their money. The 10-year yield is now higher than the S&P 500 dividend yield, which may have added to the selling pressure that cost stocks close to 2.5% on Thursday.

It’s important to recognize the reasons why yields are rising. In an email to clients on Friday, Evercore ISI analysts explained that the move is “associated with the higher inflation expectations” and that investors are pricing in “a positive economic skew.”

In other words, as expectations of a strong economic recovery mount—assisted by trillions in fiscal stimulus, loose monetary policy forever and hopes of herd immunity by summer—so do expectations for higher inflation.

This is a topic I wrote about last week. Despite what Federal Reserve Chair Jerome Powell says, prices for a lot of assets are far from “soft” and likely to continue rising as more and more liquidity is pumped into the economy.

There’s a quote by Stanley Druckenmiller I want to share with you here. On a recent episode of “Talks at GS,” the billionaire investor said that “the longer the Fed tries to keep rates suppressed… the more I win on my commodities.”

Indeed. Interest rates were slashed to near-zero last April, and since then commodities have increased about 45%, as measured by the Bloomberg Commodities Index. But they’re not done yet. I believe we’re just one big infrastructure spending package away from a full-blown commodities supercycle.

With Real Yields at or Below 0%, Is It Time to Buy the Dip in Gold?

Gold participated in the rally, hitting a new high in August, but since then it’s been stuck in a downtrend. The metal, which has the highest weighting in the commodities index at more than 13%, is being clobbered right now by rising yields. On Friday it fell further to an eight-month low.

When it comes to trading gold, I think what’s important for investors to pay attention to is not so much nominal yields but real yields. Right now the 10-year bond is trading with a yield of 1.4%, which is the exact same rate that consumer prices rose at in January year-over-year, according to the Bureau of Labor Statistics. So in reality, inflation is eating your lunch even with the yield increase.

I expect gold to catch a bid when consumer prices really start to turn up on additional stimulus. Until then, I see now as an attractive time to buy.

Want to hear more about gold investing? Register for our upcoming webcast (“Gold and Crypto: There’s Room in Your Portfolio for Both”) by clicking here.

Plus, you’re not gaining anything by leaving your money in the bank, and I mean that literally.

The average yield for a personal savings account fell to a new all-time low in February, according to an index by DepositAccounts. How low? Try 0.49%, which doesn’t come anywhere close to matching inflation, to say nothing of beating it.

Low interest rates tell only a part of the story of why this is happening. The other part is that Americans are squirreling away their money like never before, putting pressure on savings account yields. At the end of 2020, U.S. banks held a record $17.8 trillion in deposits, up significantly from $14.5 trillion a year earlier, as people were stuck at home with fresh $1,200 stimulus checks.

Here’s another way to look at it. The chart below shows you personal saving as a percentage of disposable income. You can see that the rate skyrocketed to 33% at the beginning of the pandemic, and though it’s tapered somewhat, it surged again in January thanks to the second round of stimulus.

Granted, not all of this money is sitting in a bank, but a lot of it is, and it’s earning nothing.

On the plus side, when everyone gets vaccinated and the pandemic ends, these massive savings will be unleashed on the economy as people get back to their pre-pandemic lives, book vacations, send their kids to college and more. (Colleges in the U.S. saw an unprecedented 13.1% plunge in freshman enrollment in the fall of 2020 compared to the same period a year earlier.)

Last I checked, $17.8 trillion (the amount held in banks) is a bigger sum than $1.9 trillion (the size of President Joe Biden’s relief bill, which the House approved Friday evening). All of that pent-up capital is just waiting to be put into use, which is highly positive going forward.

We’re well on our way to vaccinating everyone, but there’s still a long road ahead of us. Millions of doses have been administered (I got my second shot this week and feel great), and yet only 6.5% of the U.S. population has been fully vaccinated. Israel is the global leader with 37.8% of its population having gotten the vaccine.

A Knockout Quarter for Thunderbird Entertainment

Thunderbird, which trades on the TSX Venture (TBRD.V) and over the counter in the U.S. (THBRF), has been named to the 2021 TSX Venture 50, ranking as one of the top Canadian companies across all sectors.On a final note, Thunderbird Entertainment reported last week, and it was a knockout quarter. For the quarter ended December 31, revenue came in at $28 million, a jaw-dropping 98% increase year-over-year. The company had 21 programs in various stages of production during the quarter, on networks and platforms as diverse as Netflix, Nickelodeon, Apple and Disney+.

Jennifer McCarron has done a fabulous job leading the company as CEO and president.

Sadly, I’ll be stepping down from the board of Thunderbird, but it’s for a good reason. The remarkable expansion in U.S. Global ETFs, as well as the rapid growth of HIVE Blockchain Technologies, has meant that I have less and less time to give Thunderbird the attention it deserves. But again, with Jennifer in the driver’s seat, I have no worries about the company’s future. Onward!

Originally published by US Funds, 3/1/21

The S&P 500 Index, or the Standard & Poor’s 500 Index, is a market-capitalization-weighted index of the 500 largest U.S. publicly traded companies. The S&P is a float-weighted index, meaning company market capitalizations are adjusted by the number of shares available for public trading. The dividend yield for the S&P 500 is calculated by finding the weighted average of each listed company’s most recently reported full-year dividend, then dividing by the current share price. Yields are published and calculated daily by Standard & Poor’s and other financial media. The Online Savings Account (OSA) Index is intended to provide a representative yield that’s available from today’s online savings accounts. The Index is the average yield of ten mature online savings accounts from well-established online banks. The savings accounts must have at least two years of history with yields that have remained competitive. The TSX Venture 50 is a yearly ranking done by the TMX Group of 50 upcoming companies on the TSX Venture Exchange. The list is chosen annually by assigning equal weighting assigned to share price appreciation, trading volume, market capitalization growth and analyst coverage.

Holdings may change daily. Holdings are reported as of the most recent quarter-end. The following securities mentioned in the article were held by one or more accounts managed by U.S. Global Investors as of (12/31/2020): Apple Inc.