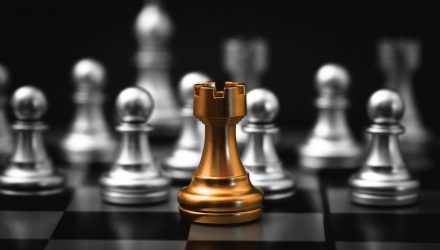 Gold exchange traded funds are strengthening, with bullion prices hitting a five-week high and looking on to $2,000, as investors turn to a reliable safe haven play to hedge ongoing risks.

“The little step-up in tension due the Russia-Ukraine war with inflationary pressures across the board boosts safe-haven demand for gold,” David Meger, director of metals trading at High Ridge Futures, told CNBC.

Gold prices rose as much as 1% on Monday as the European Union looked at an embargo on Russian gas and some curb on crude for its next round of sanctions, Bloomberg reports. The sanctions would further fuel the rally in crude energy prices and add to the appeal of the precious metal as a hedge against accelerating inflationary pressures.

Additionally, traders are turning to gold as a safe haven play to hedge against further volatility as the Russia-Ukraine war is expected to extend through the summer with Russian forces prepping for another offensive focused on the eastern region of Ukraine.

“Gold is being reinforced by elevated inflation and heightened geopolitical risk,” Kelvin Wong, an analyst at CMC Markets, told Reuters. Prices rising above the key medium-term technical resistance level of $1,975 is “likely to have attracted momentum-based traders back into the bullish camp,” he added.

Gold also gained momentum on Monday, despite a rise in yields on benchmark 10-year Treasuries, which touched their highest level since December 2018, along with a strengthening U.S. dollar.

Meger also pointed out that growth concerns out of China due to a spike in COVID-19 cases have also added to gold’s safety play.

“From a technical perspective, spot gold may face little resistance once it goes north of $2,000… However, gold’s ability to keep its head above $2000 may be strained once real yields break into positive territory,” said Han Tan, chief market analyst at Exinity.