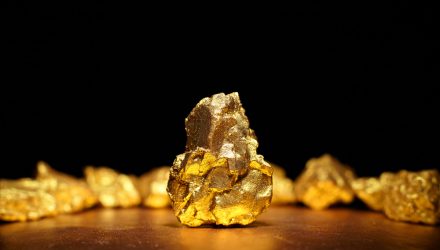 Gold-related exchange traded funds are rallying, with gold prices topping $1,900 for the first time in eight months on escalating tensions between Russia and Ukraine with the threat of an all-out invasion.

“When times really get uncertain and anxiety is running high, gold is still the safe-haven asset to go to,” Jim Wyckoff, senior analyst at Kitco Metals, told Reuters.

The rush to safe-haven assets comes after the White House warned of an imminent threat of invasion.

“An attack [on Ukraine by Russian forces] could come at any time,” according to a U.S. State Department spokesman late Wednesday, “preceded by a fabricated pretext [of] fake videos, false accusations.”

Diplomacy also appeared to have taken a back seat. Russia expelled deputy U.S. ambassador Bartle Gorman, censuring the U.S. for the heightened fears of a Russian invasion of Ukraine.

Along with its status as a traditional safe-haven hedge, gold may have also attracted some attention for its better store of value in the face of rising inflationary pressures.

“Not only do the events on the Ukrainian border have investors seeking out safe-havens, but it (gold) also offers inflation protection at a time of surging prices and the prospect of higher oil and gas prices, if Russia does invade,” Craig Erlam, senior market analyst at OANDA, writes in a note.

Minutes of the latest Federal Reserve policy meeting revealed that policymakers agreed it would “soon be appropriate” to hike benchmark overnight interest rates and that they would re-asses the rate hike timeline during each meeting.