You are at:Home»Gold & Silver Investing Channel»Gold and Precious Metals in the Spotlight: 2020 Recap 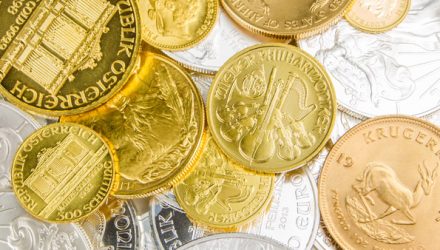 Gold and Precious Metals in the Spotlight: 2020 Recap

Gold increased more than 25% in 2020, its best year in a decade. Be sure you’re subscribed to the Investor Alert because tomorrow I will be discussing commodities—how they fared last year, and what my forecasts are for 2021. You’ll also be given a chance to download our updated Periodic Table of Commodity Returns. 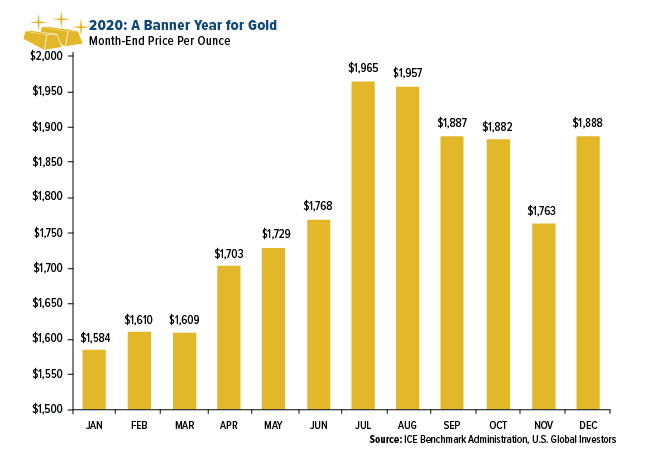 It was a banner year for the yellow metal, hitting a new record high of $2,070 an ounce in August, as investors sought a reliable store of value in the face of unprecedented money-printing.

Below, you can see the incredible surge in money supply, which helped fuel the rally in gold as well as other commodities. The amount of M1 money sloshing around the U.S. economy has skyrocketed an astounding 66% from just last year. This is well ahead of the long-term average growth rate of around 6%. (M1, by the way, includes the most liquid forms of money such as bills, coins, demand deposits and the like.) 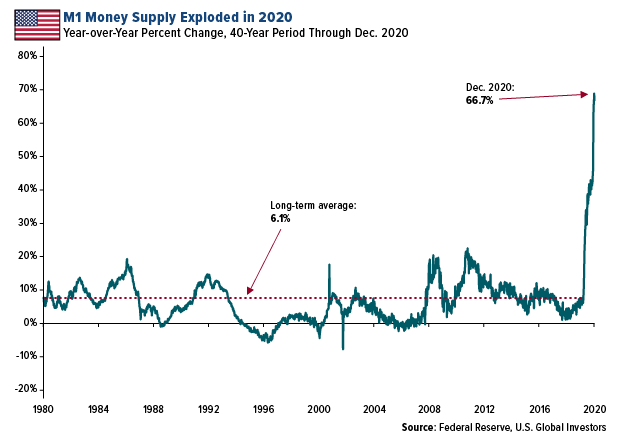 Following are some of the top stories involving gold and precious metals during 2020, by month.

Gold trades up to a seven-year high on escalating tensions between the U.S. and Iran, following the killing of a top Iranian military commander. Meanwhile, palladium prices—already at record highs— surge 25% in as little as two weeks on global supply deficits.

The novel coronavirus was first detected in China on December 31, 2019, but global markets don’t start reacting in earnest to the potential consequences until February. Gold climbs above $1,600 an ounce on haven demand and as the yield on the 10-year Treasury plummets. The Silver Institute urges investors to stay net buyers of silver and other precious metals—a good call, as silver increased nearly 48% by the end of the year.

Gold prices jump past $1,700 and American Silver Eagle coins sell out as the S&P 500 falls into bear market territory and the Federal Reserve slashes interest rates to near-zero. Palladium and platinum both soar on lockdowns in South Africa, one of the world’s leading producers of the precious metals.

President Donald Trump signs a $2.2 trillion relief package. It’s reported that central banks in Group of Seven countries purchase some $1.4 trillion in financial assets. Assets under management (AUM) in global gold-backed ETFs reach a new record high. Many analysts, including myself, forecast higher asset prices on unprecedented money-printing. I also see strong earnings for precious metal miners in the first quarter, a prediction that turns out to be accurate.

Precious metals are the top-performing hard asset of the first half of 2020, with gold up more than 17%, silver up 2%. The Fed announces that it will begin buying individual corporate bonds on top of the corporate debt ETFs it’s already begun purchasing. As a result of all this buying, the central bank’s balance sheet skyrockets past $7 trillion, representing nearly a third of the U.S. economy.

Gold starts to look overdone, with the 14-day relative strength index (RSI) exceeding 97.5, the highest reading since September 1999. Silver prices hit a seven-year high on both haven demand and future bets on massive global demand from the renewable energy sector. July, in fact, marks the best month ever for silver, soaring 34%.

Gold hits its all-time high of almost $2,070 as gold-backed ETFs report holding more bullion than any country except the U.S. The yellow metal promptly corrects. Royalty companies report another standout second quarter, with Wheaton Precious reporting record revenue of $503 million in the first half of the year. In a surprising turn of events, perennial gold skeptic Warren Buffett’s Berkshire Hathaway buys shares of Barrick Gold, the world’s second-largest producer of the precious metal. Meanwhile, I forecast $4,000 gold in the next three years.

The yellow metal corrects, notching its worst week since March. Taking advantage of lower prices, investors add 1.2 million ounces to gold-backed ETFs in a single day, the most in 2020. Wheaton Precious CEO Randy Smallwood says that gold and silver are in “golden times” right now with massive amounts of helicopter money supporting prices.

ETFs backed by physical gold climb to a new record amount of 111.05 million ounces, having recorded their 10th straight month of inflows. For the first time ever, such funds attract more than 1,000 tonnes of gold at this point in a single year, the equivalent of $55.7 billion. My friend Pierre Lassonde, co-founder of Franco-Nevada, says that “gold miners have never had it so good,” explaining that the “margins they are producing are the fattest, the best, the absolute unbelievable margins they’ve ever had.”

Silver stands as the best commodity of the year, up 48%, while gold notches its best year since 2010, up 25%. As for the other precious metals, palladium ends the year up 26%, platinum 11%. As of December 25, the combined holdings of the Fed and European Central Bank (ECB) stand at a head-spinning $16 trillion, with Evercore ISI projecting this sum to rise to $18 trillion by the end of 2021. President Trump signs a package for an additional $900 billion in COVID relief.

What could be in store for precious metals in 2021? Portfolio Manager Ralph Aldis shares his thoughts with Streetwise Reports, along with his top stock picks. Click here to read.

Originally published by US Funds, 1/7/21

M1 is the money supply that is composed of physical currency and coin, demand deposits, travelers’ checks, other checkable deposits, and negotiable order of withdrawal (NOW) accounts. The Relative Strength Index (RSI) is a momentum oscillator that measures the speed and change of price movements. The RSI oscillates between zero and 100. Traditionally the RSI is considered overbought when above 70 and oversold when below 30.

Holdings may change daily. Holdings are reported as of the most recent quarter-end. The following securities mentioned in the article were held by one or more accounts managed by U.S. Global Investors as of (12/31/2020): Wheaton Precious Metals Corp., Franco-Nevada Corp., Royal Gold Inc.