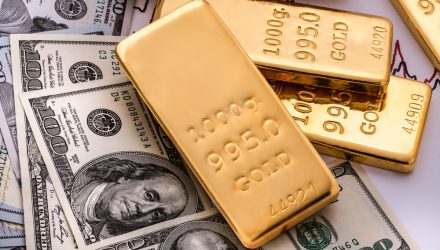 Last Friday, Sprott’s John Hathaway published a Sprott Gold Report on the what he sees as the inevitable collapse of the dollar as a safe haven and the rediscovery of gold in that role.

With a hawkish Fed weighing down on gold along with a disappointing performance despite inflation conditions, the dollar may seem to have supplanted gold as the safe haven of choice. But, according to Hathaway, “the U.S. dollar lifeboat is no longer safe for occupancy. The wait for gold to be rediscovered as a safe haven is nearing an end.”

Hathaway sees the dollar’s strength as a façade, pointing to economist Mohamed El-Erian’s assertion that a strong dollar is bad for the global economy overall. U.S. government debt securities were down 12.47% year-to-date through 3 October 2022, which Hathaway sees as a sign that the dollar may not be all it’s cracked up to be. “Dollar strength is a mirage. It is the reverse image of all other paper currencies’ weaknesses. In our view, the dollar wrecking ball may well represent the last stand for paper currencies in general, all of which are the ever-increasing issuance of fiscal decay.”

With the Fed continuing to to tamp down on inflation, Hathaway noted that interest rates on U.S. debt will accelerate from its current monthly “upward creep” of 8.7 basis points, which translates to nearly $300 billion in addition to fiscal deficit. “Factors that would accelerate this monthly creep to a gallop would be the continuation of Fed hawkishness plus sales by foreign holders of U.S. Treasuries to defend their national currencies,” he noted. 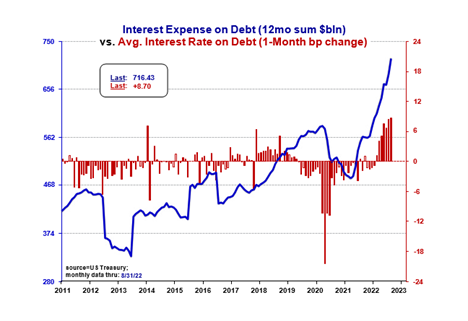 Source: Meridian Macro Research LLC. Data as of 31 August 2022. Included for illustrative purposes only. Past performance is no guarantee of future results.

With the declining liquidity of the Treasury market on the table, as well as a potentially catastrophic housing bubble that could be worse than the bubble of 2004–2007, according to Bank of America’s Ralph Axel, Hathaway sees the potential for an historic mismatch between supply and demand. Hathaway wrote, “While the Fed may have been resolved at one time to look askance at the damage to the U.S. equity and bond markets when it embarked on its anti-inflation crusade, we believe that it was ignorant, even clueless, as to the economic repercussions of rising interest rates and draining liquidity.”

Hard Landing and the Parachute of Gold

With the Fed likely to make a hard landing in its fight against inflation, gold and mining stocks could anticipate the policy pivot ahead of the headlines. “The risk/reward is asymmetric to the upside. Figures 6-8 speak for themselves,” Hathaway wrote, noting that the fundamental strength in both gold and gold equities make them primed to be rediscovered as the safe haven they always have been. 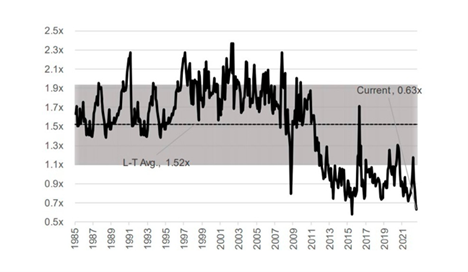 Source: Company reports; FactSet; Scotiabank GBM estimates. Data as of 3 October, 2022. Included for illustrative purposes only. Past performance is no guarantee of future results. 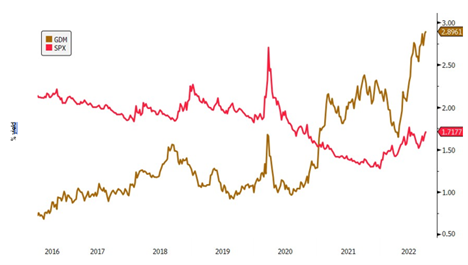 Source: Bloomberg. Data as of 30 September 2022. Included for illustrative purposes only. Past performance is no guarantee of future results.

Source: Bloomberg. Data as of 27 July 2022. Included for illustrative purposes only. Past performance is no guarantee of future results.