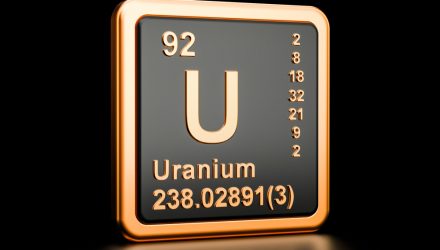 In talking about climate change, UN Secretary General António Guterres told leaders from 40 countries, “half of humanity is in the danger zone from floods, droughts, extreme storms, and wildfires. No nation is immune. Yet we continue to feed our fossil fuel addiction. We have a choice. Collective action or collective suicide. It is in our hands.”

As the world struggles to pivot to renewable energy sources, Nuclear power looks like it could be an ideal solution. It is a zero-emission energy source with enormous capacity to generate power despite its low carbon footprint. Most of the cost and environmental impact of nuclear power comes from getting a facility online.

With a string of bad news on the climate change front, investors might want to look at the Sprott Physical Uranium Trust (U.U) which provides direct exposure to physical uranium. The uranium bull market is liable to have a very long tail given the dire climate situations arising around the world and the energy crisis in Europe brought about by Russia’s invasion of Ukraine.

An unprecedented heatwave in Europe started a series of wildfires. Temperatures in Portugal reached 116F with no respite on the horizon this week. “The risk of fires remains very high,” civil defense chief, Andre Fernandes, said, although media reports said the number of active mainland fires was down to 11 from 20. Portugal saw over 98,000 acres scorched by wildfire.

On an episode of Sprott Gold Talk Radio, WMC Energy’s Per Jander noted, “From an energy security standpoint, nuclear energy brings stability to the grid. It’s very reliable. It’s a predictable cost. You refuel these stations once a year and then you have enough storage on site for a reload at least. You’re not really held hostage to any supply issues and you have a very good line of sight to your future fuel costs.”

Other green energy sources, such as solar and wind, are not always producing energy. Solar requires the sun to be out, and wind output is dependent on the whims of weather. A relatively calm day with few breezes won’t produce much energy.

With time running out to wean the world off of fossil fuels, uranium is critical to the survival of humanity.