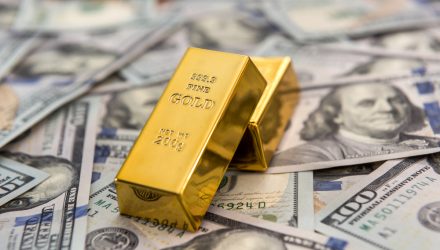 The U.S. consumer price index rose only .5% in July, down from a .9% increase in June, easing tapering fears. Meanwhile, spot gold opened today at $1,751.27, having recorded its biggest one-day percentage gain since early May. Additional support for gold was provided by a dip in both the dollar and bond yields.

For the gold market, the “immediate question is that of tapering, which some FOMC (Federal Open Market Committee) members have been suggesting could start as soon as late 2021. But the latest CPI numbers suggest that those arguments have weakened,” StoneX analyst Rhona O’Connell said in an interview with CNBC.

Inflation fears have also somewhat subsided, though the delta variant could lead to further shutdowns, which might mean additional stimulus checks. Additionally, President Biden’s 3.5 trillion dollar budget along with the bipartisan infrastructure bill have opened the door for an increase in the debt ceiling, which could further buoy gold.

Regarding the CPI data, OANDA Europe senior market analyst Craig Erlam wrote that “the data yesterday was encouraging but any signs here that it was a blip could unwind all of yesterday’s good feeling and replace it with anxiety once more.”

Some people, such as Diego Parilla, manager of a $250 million dollar Quadriga Igneo fund, believe that massive long-term damage has been caused by the monetary and fiscal policies of governments around the world in the past few years. “Central bank money printing isn’t really solving problems, it’s delaying the problem,” Parrilla told Bloomberg. “Gold will benefit purely from being a physical asset that you cannot print.”