You are at:Home»Featured»The Gold Rush Is On As Viral Madness Dominates 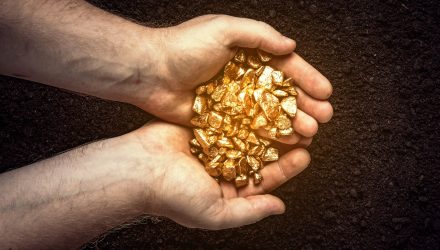 The Gold Rush Is On As Viral Madness Dominates

The lustrous metal is also blooming as analysts noted that they are beginning to factor in the potential for central-bank rate cuts to curtail any economic damage from the outbreak, .

As stocks have plummeted 3-4% so far on Monday, gold prices seem to be on the verge of going parabolic, rising roughly $100 in the last week, and up over 3.5% today, and rapidly approaching $1700 an ounce, with targets as high as $2000 this year, according to some analysts.

“Concerns about the Covid-19 virus, which is now spreading rapidly in countries such as Italy and South Korea, are driving up risk aversion among market participants and allowing gold to soar higher and higher,” said Daniel Briesemann, analyst with Commerzbank.

“Stock markets around the world are beginning to price in what bond markets have been telling us for weeks – that global growth is likely to be impacted in a meaningful way due to fears of the coronavirus,” Chris Zaccarelli, chief investment officer for Independent Advisor Alliance, said in a statement on Monday, noting that “it is still our belief that this threat to global growth is real and should not be ignored.”

As of Monday morning, more than 79,000 infections had been confirmed worldwide, with over 2,600 deaths counted. The virus to date has been mainly focused within mainland China, and multinational businesses in the international manufacturing, retail and tourism industries have been concerned about its spread for quite sometime, as quarantine restrictions have a direct impact on factory slowdowns and travel in China, having the potential to decimate first-quarter earnings reports.

“Right now, because of the spread of the coronavirus into different cities, people are starting to panic,” said Phil Flynn, senior market analyst at Price Futures Group. “They are going into a full-court press into gold…as concerns are growing that people see the virus potentially damaging economies and economic growth around the globe.

“There are concerns that countries will have lower interest rates, thereby devaluing their currencies. That is making gold an attractive, safe haven.”

Investors looking to use ETFs to play the run in the gold market could look into the SPDR Gold Trust ETF (GLD) or the VelocityShares 3x Long Gold ETN (UGLD) which have been moving well with the precious metal in the last month.
For more market trends, visit ETF Trends.