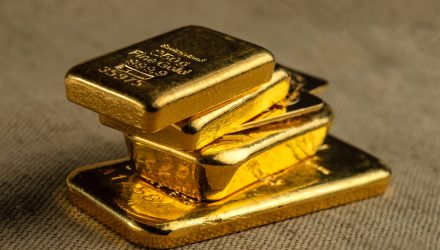 Gold exchange traded funds slipped late Tuesday after touching their highest level in four weeks in response to renewed a bout of potential geopolitical risk between the U.S. and China over House Speaker Nancy Pelosi’s visit to Taiwan.

The spot gold prices slipped late Tuesday after earlier crossing over $1,789 per ounce, their highest level in about a month.

A combination of a more muted Federal Reserve interest rate hike outlook, a slowdown in the U.S. economy, and a contentious U.S. political visit to Taiwan all contributed to the earlier gold gains.

“The visit from Nancy Pelosi to Taiwan, increasing tensions between the United States and China, is an additional supporting factor for gold,” David Meger, director of metals trading at High Ridge Futures, told Reuters.

Gold prices gave back their earlier gains after Pelosi landed on Taiwan, and China only announced military drills and missile tests in response after declaring the U.S. would “pay the price” if a U.S. senator visited the island of Taiwan.

U.S. House of Representatives Speaker Pelosi’s visit to the Chinese-claimed Taiwan island was the first time a House speaker visited the democratically governed island since 1997. The politically tense visit also comes with greater risks of dividing relations between Washington and Beijing as China does not recognize Taiwan’s governing body as a separate state.

Gold has been a traditional safe-haven asset in times of both economic and geopolitical risk-off events.

Additionally, a more muted monetary policy outlook has also helped gold prices rebound from a 15-month low. The weakening U.S. economic data has helped fuel expectations that Fed officials may be taking on a softer stance to rate hikes after raising rates by three-quarters of a percentage point for the second time.