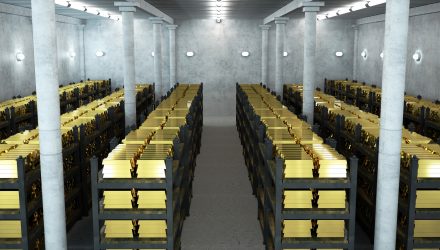 Over the past month, the benchmark gold ETFs are lower by more than 4% and GLD resides more than 10% below its 52-week high, meeting the definition of a correction.

According to the World Gold Council, gold-backed ETFs experienced outflows in North America and Asia but saw inflows in Europe over June, Reuters reports.

“The two largest US-listed gold ETFs – the SPDR Gold Trust (NYSEArca:GLD) and the iShares Gold Trust (NYSEArca:IAU) – have now shrunk for 3 months running, losing over 100 tonnes between them since end-April’s 18-month peak at 1,159 tonnes,” according to Bullion Vault.

Commodities, including gold, are denominated in dollars, meaning that as the greenback strengthens, commodities often do the opposite. The inverse relationship between gold and the dollar has recently been on display.