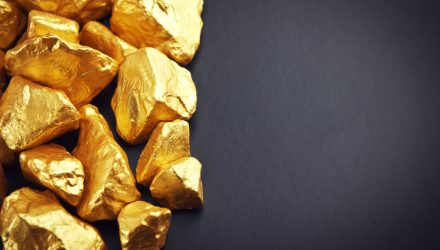 Gold ETFs Could Get a Fed Assist in 2019

The Federal Reserve’s tightening regime, which as of Wednesday, Dec. 19th included four interest rate hikes this year, is widely viewed as one of the major factors hindering gold and gold exchange traded funds this year.

Higher U.S. interest rates have contributed to upside that has made the dollar one of the world’s best performing major currencies this year. Commodities, including gold, are denominated in dollars, explaining why ETFs such as the SPDR Gold Shares (NYSEArca: GLD) and the Aberdeen Physical Swiss Gold Shares (NYSEArca: SGOL) have delivered slack performances in 2018.

With the Fed under pressure to ease its tightening trajectory, gold could benefit in 2019 if the U.S. central bank obliges.

Much of the near-term thesis for gold revolves around the Fed’s plans for interest rates. The Fed has boosted borrowing costs three times this year and market observers widely expect a fourth rate hike in December. However, President Trump has not been shy about saying he would like to see the Fed slow its pace of rate increases

Expectations that gold normally rallies around this time of year jibe with investors’ sentiment that bullion is poised to rebound in 2019.