You are at:Home»Featured»Gold ETFs Could Continue To Rally According To Analysts 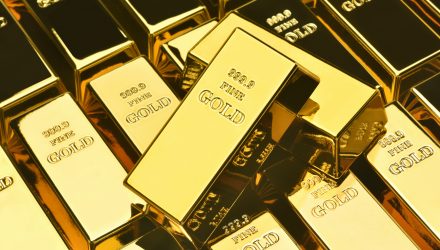 Gold ETFs Could Continue To Rally According To Analysts

Safe-haven assets like gold are gaining interest on Friday as tech stocks are getting thrashed for the third week in a row, driving stock indexes and ETFs lower.

U.S. stock traders have probably been on edge given that Friday is the ominous “quadruple witching” day, during which stock index futures, options on futures, and options on stocks expire. Quad witching often results in increased volatility in the stock indexes, causing investors to look to more stable and safe assets.

Gold has been trading in a range lately, following its selloff from the recent all-time highs in August, but October gold futures are climbing today, up 0.44% at $1,958.40, and having reached as much as $10 higher.

President Trump is preventing U.S. citizens from downloading the Tiktok and WeChat programs beginning this weekend, which is also causing some global jitters, as tensions have been rising between the U.S. and China, which could also be more bullish for gold and other safe haven assets like Treasury bonds.

Analysts are bullish on the precious metal as well, looking for a support level to be established over the coming weeks.

“The fact that people are not selling into a market that isn’t as frenetic as it was a month or six weeks ago indicates to me that this market is setting up for the next leg higher,” Peter Hug, head of Kitco’s precious metal division said on Wednesday.

Yesterday, the Federal Reserve declared they would maintain interest rates at current levels through 2023 in an effort to spur economic growth and inflation.

Hug noted that Fed officials like Chairman Powell appeared concerned about the economic recovery “…and the legs this economy is going to have”.

“[About] three Fed meetings ago they indicated they would hold rates at pretty much zero through the end of 2021. They’ve extended that by an additional year. Some analysts are expecting that they will keep rates at zero right through 2024.”

Hug said that with the Fed “…being a bit more accommodative on inflation indicates to me, it’s a very positive environment for hard assets in general.”

Hug also noted that the stability in metals has led to more inventory.

“I see this market as running sideways as long as we don’t get another rush into the buying side from the retail investor. In another two- to four weeks, there’ll be reasonable inventories on the market,” said Hug.

Hug is not the only analysts to foresee metals climbing higher. Swiss banking giant UBS believes gold could climb further than the 30% it has already achieved in 2020, and remain at lofty levels as global uncertainties continue.

“We are very bullish on gold. We think that the prices will go higher and what is interesting is we think it will stay higher for longer than expected,” Yeoh Choo Guan, the bank’s head of Asean global markets, told CNBC’s “Squawk Box Asia” on Friday.