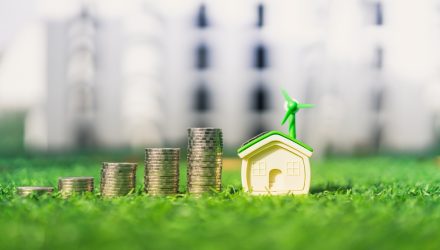 Advisors and investors are quickly learning that as the clean energy movement evolves and gains momentum, there are a variety of avenues to explore at the investment level.

Some exchange traded funds are up to the challenge, and that includes the Goldman Sachs Future Planet Equity ETF (GSFP). The $169 million GSFP is just over a year old, but rather than focus on relative youth, investors should assess this ETF from the perspective of long-term potential and relevance.

For those that insist on viewing the renewable energy movement on a more short-term basis, there are compelling reasons to consider GSFP.

“In 2020, renewable energy generation in the U.S. surpassed that from both coal and nuclear energy for the first time ever,1 and by March 2021 nearly a fifth of the world’s largest companies had set net-zero goals. There are many signs these trends will continue, including broad international support and the United Nations’ ambitious goal of net-zero emissions by 2050,” according to Charles Schwab research.

Experienced renewable energy investors know that this investment thesis has global implications and is being powered, in part, by massive amounts of planned government spending. That includes the recently signed Inflation Reduction Act here in the U.S.

However, GSFP’s long-term proposition is further supported by the fact that clean energy growth is also being fueled by corporate and private investment, which is usually more effective and targeted than government expenditures.

“Amid public insistence and global agreement, more government funding for clean-energy incentives and mandates is on the way. Regulations aside, many companies are already pivoting toward more environmentally friendly practices in response to consumer and investor demand,” added Schwab.

Among the green energy concepts accruing momentum among companies is carbon-capture and reduction. That’s relevant to investors evaluating GSFP because those are among the core competencies of the ETF’s holdings.

“Reducing greenhouse gas emissions is also on the upswing. As of September 2021, at least 27 commercial-scale carbon-capture projects were in operation worldwide and an additional 106 were in development,” noted Schwab.

Another benefit of GSFP is that as an actively managed ETF, it can allocate to companies that are credibly engaged in providing carbon-reduction services and technologies.

“As with any area of investing that’s undergoing seismic change, it’s important to not get caught up in the mania. Be sure to separate those companies that are walking the walk from those that are merely talking the talk—or investigate mutual funds or ETFs that do it for you,” concluded Schwab.