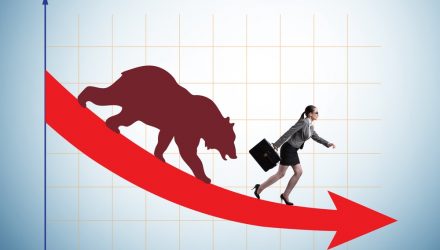 Stocks recently slipped into a bear market as highlighted by a year-to-date decline of 20% for the S&P 500. Some benchmarks are performing significantly worse than that.

With that in mind, investors are scurrying for bear market protection. That may be found in surprising places, including the Goldman Sachs Innovate Equity ETF (GINN). As a large-cap growth strategy, GINN is enduring its share of headwinds this year, but there’s also potentially more safety in the exchange traded fund than meets the eye.

GINN isn’t a dedicated ETF, but it allocates 32.5% of its weight to that sector, which is relevant on multiple fronts. Obviously, tech is one of the worst-performing sectors this year. That’s the bad, priced in news. On the other hand, GINN is loaded with high-quality names, plenty of which have seen valuations decline to previously unthinkable levels.

Compelling valuations in tech are highly relevant today not only from the perspective of good deals but also on a historical basis.

“Across the 10 periods where the broader market has declined 10%+ since 2000, tech’s average annualized return has been -44%, while the broader market has been -33%,” wrote Bernstein analyst Toni Sacconaghi in a recent report. “Across all the drawdowns, the most expensive quintile of tech stocks underperformed most, while the least expensive fared best.”

Regarding GINN, the above commentary is pertinent because, these days, it is smaller disruptive growth stocks that are struggling the most in the growth/tech arena. While disruptive and innovative growth companies remain attractive long-term ideas, the group is out of favor today and still pricey, according to some experts. Fortunately, that’s not GINN’s area of emphasis.

On that note, Bernstein’s Sacconaghi highlights some tech stocks that could prove steady relative to peers and some of those names are GINN components. Apple (NASDAQ:AAPL), a top 10 holding in GINN, is one example.

“Both companies are trading at low valuations — seven to 10 times earnings per share — and many computer hardware stocks boast strong corporate demand and high backlogs on a historic basis,” Sacconaghi said, according to CNBC.