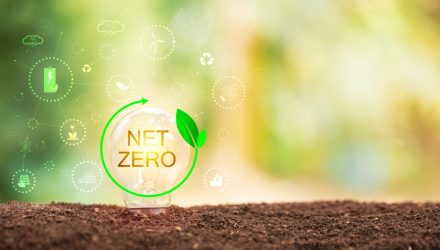 There is no shortage of companies making carbon reduction pledges and announcing net-zero goals. At the sector level, many of these firms reside in the energy and utilities sectors, which makes sense given the large carbon footprints found in those groups.

However, other sectors are chock full of companies with ambitious net-zero goals, making for some interesting surprises in terms of exchange traded funds. The Goldman Sachs Future Consumer Equity ETF (GBUY) is an example of an industry ETF with more net-zero credibility than meets the eye.

As its name implies, GBUY is a fresh spin on investing in consumer-related equities. On a related note, the fund isn’t a dedicated consumer discretionary ETF, but it allocates 26.2% of its weight to that sector and another 4.2% to consumer staples, providing investors with robust exposure to net-zero goals courtesy of consumer goods firms.

“Surprisingly, some of the largest net-zero commitments have been made by consumer goods companies, such as PepsiCo PEP, L’Oréal LRLCF, and General Mills GIS. According to data collated by the Net Zero Tracker—a global initiative to increase the transparency and accountability around net-zero targets—around half of the top 2,000 companies in the world by revenue have committed to a science-based long-term goal to reduce their carbon emissions to net zero,” wrote Morningstar analyst Diana Radu.

Those particular names aren’t GBUY members, but the ETF holds some stocks that are comparable to L’Oreal, indicating that the fund is relevant when it comes to a combination of consumer goods companies and net-zero goals. In fact, when it comes to net-zero targets, consumer staples and consumer cyclical companies rank third and fourth, respectively.

“A whopping 85% to 95% of consumer goods companies’ emissions are classified as scope 3, whose reduction is contingent on the actions of suppliers and consumers,” added Radu. “Therefore, consumer goods companies will need to direct their efforts toward engaging with suppliers and ensuring they uphold the same high environmental standards, as well as helping consumers lower the emissions associated with the use and disposal of products.”

On that note, GBUY’s nearly 7% weight to Amazon (NASDAQ:AMZN) is highly relevant because that company has the power to enforce net-zero standards among suppliers or, at the very least, ask suppliers to make improvements on that front. Additionally, due to its heavy last mile exposure (package delivery), Amazon can affect significant net-zero change by transitioning to electric vehicles.