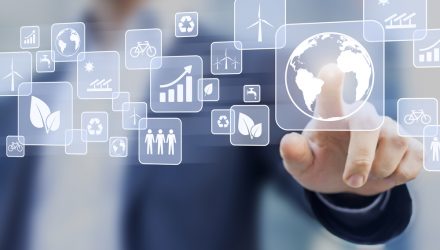 To advance climate change goals, it’s going to take an array of environmental services and solutions and massive amounts of spending to those effects.

Plenty of exchange traded funds purport to be tethered to those themes, but this is a segment of the ETF arena where it pays for investors to be judicious. Enter the Goldman Sachs Bloomberg Clean Energy Equity ETF (GCLN).

GCLN follows the Bloomberg GS Global Clean Energy Index and, arguably more so than many of its counterparts in this category, is leveraged to the environmental solutions landscape. It’s an expansive area, and GCLN meets that challenge. The fund holds 184 stocks, a comparatively large roster relative to competing strategies, giving it ample leverage to various clean energy concepts, including solar. That’s a potential positive because the Biden administration is relaxing some solar-related tariffs.

“Amid the threat of tariffs, manufacturers in the four nations had largely halted shipments to the US, stalling solar projects and prompting at least one utility to warn it would keep a coal plant operating longer than planned,” according to BNP Paribas research. “The Commerce Department is set to issue preliminary findings by late August. Biden’s move provides a two-year bridge for US solar developers to obtain modules and cells duty-free from southeast Asia, even as the probe proceeds, the White House said.”

GCLN allocates 41.1% of its weight to utilities. Before investors ponder why that’s the case, it’s worth noting that some traditional utilities are boosting their renewable energy profiles via delivery of wind and solar power. For example, NextEra Energy (NYSE:NEE) — GCLN’s largest holding at a weight of 5.3% — is a major solar player.

Beyond that, GCLN allocates 46.2% of its roster to industrial and technology stocks, putting it front and center in environmental solutions conversations. That could be a good place to be for long-term investors.

“The Department of Energy has been told to work on rapidly expanding manufacturing of solar panel parts, building insulation and other gear. Power transformers and equipment for making and using fuels generated by electricity are also included. The Defence Production Act move should catalyse finance for clean energy manufacturing including loans and grants,” added BNP Paribas.