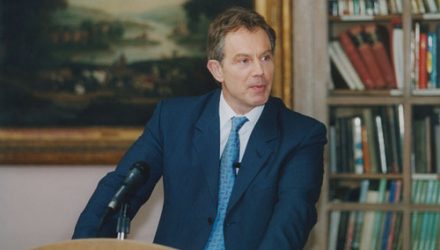 The following is the unofficial transcript of a CNBC interview with Former British Prime Minister Tony Blair and CNBC’s Wilfred Frost on CNBC’s “Closing Bell”.

The following is a link to video of the full interview on CNBC.com:

FROST: So in this — this meeting today, just some brief comments we’ve had out of it already, the president said that he hopes to work something out on a fair trade deal with Europe. Do you think that is likely to materialize in the near future? And if it does will it justify the tactics would it justify the tactics he’s deployed to get to this point?

BLAIR: Well, I think it — it all depends whether the purpose of the tactics is to put the issue on the table and then get a resolution, or whether it signals, you know, more profound shift in policy towards economic nationalism. If it’s the first, I think it can be dealt with. If it’s the second, obviously it will trigger a series of reactions that would be unfortunate. But I’m hoping it is the first. I mean there are real trade issues between the U.S. And the E.U., between the U.S. and China. And these are things that are perfectly reasonable to want to work out. It’s just they have to be done in a way that doesn’t end up causing a – a problem in the whole global trading system.

FROST: Does the president have a point when he suggests in various comments and Tweets that the E.U. is quite hard to negotiate with?

BLAIR: Well, the E.U. Is going to look after its interest, in the way America will look after its interests. And that’s perfectly natural. But I think — the key thing for me is whether you’re adjusting the terms of trade in order that you deal with certain grievances that both sides might have about the practices of the other or whether you’re embarking on a — really a new approach to the global trading system, now that would really worry me. If that was the case then we were about to see a descent into a — a sort of spiral downwards into a trade war. That would obviously be, you know, it’d be a huge problem for the world economy. I don’t think that is what the U.S. is trying to do and it’s certainly not what Europe wants. So, let’s, you know, let’s — let’s give it a chance to work. By the way, and Juncker – the Juncker obviously I know extremely well – I mean has got 30, 40 years’ experience of dealing with the issues.

SARA EISEN: I wonder though if he has the backing of all 28 leaders that are in the European Union. And what do you think about the tactic of imposing unilateral tariffs in the name of national security as a negotiating tool to drive better trade deals. Is that going to work?

BLAIR: Well – it’s — people are going to — to ask whether that indicates that there’s going be a reasonable dialogue or not. The important thing to understand about Europe is it’s – you know – it’s a huge market. It does immense amount of trade with America. It’s very important that it protects that market. But he will have the — the full backing of the European Union in taking, you know, a reasonable but still tough stand. And he will want to make sure he is representing European interests properly.

BLAIR: I don’t think we underestimated him, but I think at that time when I first got to know President Putin, I think we very much hoped that we could create a cooperative atmosphere between the west and the changed Russia, after the fall of the Soviet Union. And for whatever reason that didn’t materialize and today I think President Putin regards himself very much in competition with the west. Now there are certain areas where we still have to cooperate and fight against terrorism, for example. And then there are other things that Russia is doing where the west has got to take a — a clear and principled stand. So I think again there the question is – you know, the west and the alliance of western nations and N.A.T.O., that is an alliance of interests but that is also an   alliance of values. And it’s important that we’re clear that those values are going to be protected. Now whatever people say about the recent summit between President Trump and President Putin, if you look on the ground as the Secretary General of N.A.T.O was actually explaining to me last week, actually America has stepped up its defense commitments to Eastern Europe, which is a good thing, by the way. So again, let’s leave aside whatever the talking is and focus on what the reality is.

FROST: So in that essence, do you think the media criticism of the president’s meeting in Helsinki and the rest of the dealings with Russia perhaps is overstated a little bit?

BLAIR: Well, I think it was bound to happen as a result of the way the meeting came out. But in the end the thing for me that matters is to reassert the importance of N.A.T.O, the importance of collective defense and to send a very clear signal to Russia that we want a cooperative relationship. Where we need to work together, we should work together. But there are certain clear rules that have got to be abided by. And you know, you’ve got a situation still in the Ukraine which is extremely difficult for the people there.

FROST: On the topic of Iran, clearly the president has taken a very hard line. He’s pulled out of the deal that was signed in July 2015 against the wishes of various – various allies. Do you think that hard line on Iran is fair, though?

BLAIR: Look, I’ve said I would have kept the deal in place. But I do think a tough position against Iran and destabilizing tactics in the Middle East is absolutely right. Look, I’m in the Middle East once or twice a month. My institute works — does a lot of work there particularly on the relationships with different countries in the Middle East. And you see the destabilizing impact of Iran. In a way I would prefer to see the nuclear issue as it were dealt with by the agreement and a real pushback against the other activities of Iran. But I think given where we are now, it’s important that we try and build as much unity between America and Europe on the areas we can definitely agree with in relation to Iran which is their activities around the region.

FROST: Let’s switch focus back home to the United Kingdom. Do you envy the Prime Minister’s job at the moment?