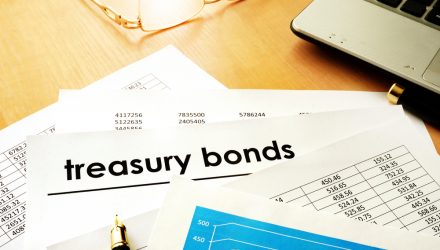 U.S. Treasury bond exchange traded funds slipped Wednesday, with the yield curve steepening to a four-year high, as risk appetite improved on signs that negotiations between the United Kingdom and European Union were progressing toward a historic post-Brexit trade deal.

Investors trimmed safe-haven exposure, which contributed to the fall in Treasury bonds and rise in rates, as U.K. and European officials were closing in on a new trade deal that would help the two sides avoid heavy tariffs at the start of the new year, the Wall Street Journal reports.

Yields initially dipped in the overnight session after President Donald Trump said he wouldn’t sign the new coronavirus relief bill passed by Congress because the dollar amount in stimulus checks was not high enough. However, yields reversed course and rose on updates from the U.K. and EU on a possible trade deal as early as Wednesday.

Without a trade deal, tariffs would be applied to both sides for the first time in almost half a century, adding to further economic disruptions between the two regions as the world continues to struggle with a resurgence in new Covid-19 infections.

Investors typically trim government bond holdings when they are feeling more risk-on about the economic outlook, partially due to improved growth that can lead to a higher rate of inflation and less accommodative monetary policy from central banks. A stronger economy also encourages a shift to riskier assets or diminished demand for safe-haven assets like low-yielding government debt.

The selling on Wednesday helped push benchmark 10-year U.S. Treasury yields to its closet in weeks to the psychologically significant 1% threshold.

“For years, the world has been waiting for a final deal on Brexit,” Glen Capelo, head of rates sales and trading at Mischler Financial, told Bloomberg. “Any final positive Brexit deal (no hard exit) would finally dissipate the cloud hanging over the entire European Union. So look for global long-end rates to move higher as a wave of pent-up investments can now be made across the continent and especially in the U.K.”