You are at:Home»Fixed Income Channel»Treasury Bond ETFs Just Marked One of Their Best Performances in Years 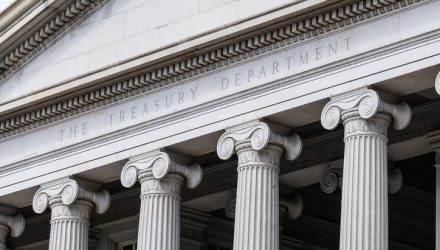 The bond market rallied this year on slowing growth that was exacerbated by the trade war between the United States and China, weak inflationary headwinds and concerns that the Fed bank went too far too fast in hiking interest rates last year. The confluence of events helped at one point push benchmark yields to their lowest levels since 2016, Reuters reports.

The sudden drive toward safe-havens also caused the closely watched yield curve between two-year and 10-year notes to invert back in August, reflecting growing pessimism and the potential that a recession is just around a corner. However, the yield curve has since steepened out to its highest levels since October 2018 as investors shifted to a risk-on sentiment and fueled the record-setting stock market rally.

Investor confidence returned this month as the growth picture in the United States improves with strengthening economic data like a health jobs market. The increase in risk appetite was also a result of the United States and China agreeing to the first phase of a trade deal, which is expected to be signed in mid-January. The risk-on shift, though, has eaten into the Treasury bond’s returns, with 30-year bonds ended December with a 2.83% loss and 10-year notes ended with a 0.91% dip.