Fed Chair on Trade Wars: 'It's a Concern, It's a Risk'
You are at:Home»Fixed Income Channel»Trade Wars Do Not Concern Fed Chair Just Yet 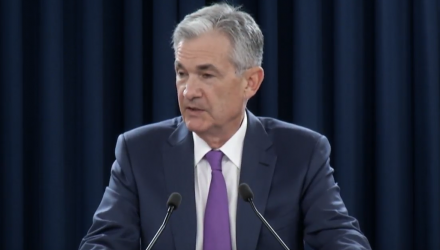 Trade Wars Do Not Concern Fed Chair Just Yet

After announcing that the Federal Reserve is raising the federal funds rate by 25 basis points to 2.25, Fed Chairman Jerome Powell proceeded to receive a battery of questions regarding the health of the broad economy, but in particular, he also had to address the trade wars, particularly between the United States and China.

Less than 24 hours later, China responded with $60 billion worth of tariffs on U.S. goods, which took effect on Monday. The new round of tariffs from China are said to affect a list of 5,207 products within a range of 5 to 10%. Both the U.S. and China have already slapped each other with tariffs worth $50 billion total.

Market analysts are prognosticating that an escalation in the trade wars could give pause to the Fed’s current rate-hiking policies moving forward as they could potentially stymie economic growth. Powell was measured in his responses to questions regarding trade wars.

“I guess I need to start by saying that we’re not responsible for trade policy, we don’t comment on particular trade actions and that sort of thing,” Powell established in the press conference.

Despite establishing this precedent on trade war questions, Powell didn’t sidestep the issue, commenting that the Federal Reserve is fully aware of the ongoing fret amongst not only the capital markets, but from actual businesses themselves.

“You will have seen that we have this very extensive network of business contacts around the country through reserve banks largely and we’ve been hearing a rising chorus of concerns from businesses all over the country,” Powell added.

However, despite the growing concerns of trade wars, Powell said its wide-ranging effects have yet to penetrate the economy and cause any disruptions.