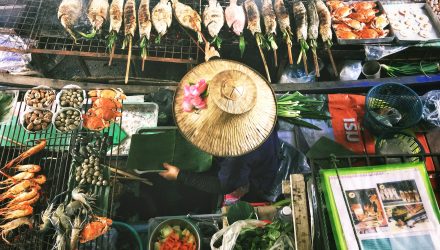 Investors began 2018 with a generally optimistic view, but this euphoria faded by quarter-end as protectionism and talk of a US/China trade war became a key concern. Despite investor pessimism, we expect further volatility might create the opportunity to invest in high-quality Asian equities at lower valuations.

Market volatility spiked as US President Donald Trump started delivering on a campaign promise to rework “bad” trade deals struck by his predecessors. First, he announced tariffs on Chinese steel and aluminum. Then, he announced plans for a 25% tariff on $60 billion of mainly high-tech products from China1 relating to intellectual property rights.

As expected, China retaliated by threatening to add an additional 25% levy on about $50 billion of US imports including soybeans, automobiles, chemicals and aircraft.2 Most recently, it was reported that Trump is considering an additional $100 billion in tariffs on selected Chinese goods.

Much ado about nothing? Trade War Talk

Through their recent actions, we see the US and China both attempting to stake out strong positions before heading to the negotiating table. For China, the immediate impact is expected to be small — we estimate these tariffs will apply to only about 2.7% of the country’s total global exports.

The initial damage to the Chinese economy could be a minor reduction in gross domestic product (GDP) of between 0.1% and 0.2%.4However, the medium-term impact will likely be mitigated by export diversification. With China’s GDP predicted to grow at 6% to 6.5%5 for the next few years, the impact of these tariffs is expected to be barely perceptible even if fully implemented.

That said, the headlines and risk of a trade war certainly contributed to volatility and weakened investor appetite of late, especially considering the market’s strong performance in 2017.

Despite the market volatility in the first quarter, Asian companies overall (ex Japan) saw strong positive revenue and earnings revisions. These were driven primarily by upward guidance by companies in China — rising over 11% in the past six months.

Interestingly, the revisions during the last quarter were more positive for momentum and growth stocks than for quality and value stocks. Quality stocks often initially underperform in economic upturns because stable earnings usually lag behind cyclical stocks with rapidly accelerating earnings.

At the end of the first quarter, China’s price-to-earnings ratio (P/E) for the next 12 months was approximately 12.5x,6 which the Invesco International and Global Growth team considers attractive and is well below the benchmark’s ratio of 17x.6.