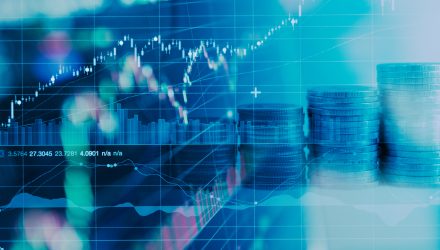 The Best Could Be Yet to Come for Bond ETF Inflows

After the final quarter of 2018, a flight to fixed income exchange-traded funds (ETF) boosted inflows halfway through 2019, and the best could still be yet to come, according to CFRA’s Todd Rosenbluth.

Taxable corporate and government bonds saw an 11.5 percent increase in flows thus far through 2019. Furthermore, other corners of the bond market like municipal bonds saw a 9 percent gain as U.S. equity ETFs lagged in comparison with just a rise of 3 percent.

“We’re seeing a flight to quality,” said Rosenbluth on CNBC’s “ETF Edge.” “So, investors have pushed down yields, and as a result, they’re using ETFs to be able to take on additional risk.”

“Investors’ risk appetites have certainly improved relative to where they stood in the back half of last year, and you see that in the way that they’ve fanned out further on the yield curve,” he added. “If you look at where we’re at in the equity markets, the fact that we are in the midst of what’s been the best June in decades, well, ETFs in the equity space were sluggish out of the gate, certainly through the first five months of the year.”

Amid a volatile May that highlighted trade wars as the culprit for equities, it also did a number on taxable bond inflows. According to the latest Morningstar report on U.S. mutual fund and exchange-traded fund (ETF) fund flows for May 2019, taxable-bond inflows fell from $42.6 billion in April to $15.4 billion in May, the group’s worst showing year-to-date.

Furthermore, with additional funds reporting assets after the April fund flows report published, Morningstar data shows about $89.0 billion between active and passive U.S. equity funds reaching parity. Morningstar estimates net flow for mutual funds by computing the change in assets not explained by the performance of the fund, and net flow for U.S. ETFs shares outstanding and reported net assets.

Morningstar’s report about U.S. fund flows for May is available here. Highlights from the report include:

A volatile May no doubt elicited a risk-off sentiment that permeated throughout the capital markets, causing high-yield bond funds to experience record outflows. Furthermore, with bond market mavens warning investors of headwinds in the fixed income space like the possibility of inverted yield curve, rising rates and BBB debt sliding out of investment-grade, investors need to be keen on where to look for opportunities to hide away when markets head downward.