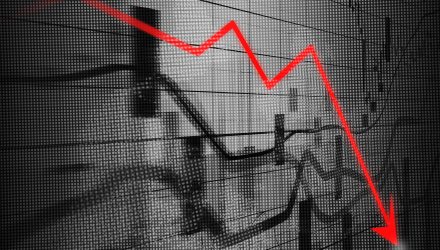 Just two weeks after Federal Reserve Chairman Jerome Powell praised the growth of the economy and not long after the S&P 500 reached historic highs, the Dow Jones Industrial Average took a 800-point gut shot at the close of Wednesday’s trading session, possibly signaling the extended bull run is ready to make its final curtain call.

Leading the rout were familiar technology names like Apple, Google, Facebook and Netflix–the same group responsible for much of the growth experienced during the historic bull run seen in U.S. equities.

“People are getting out of the high-flying tech names right now,” said Larry Benedict, CEO of The Opportunistic Trader. “I think people are under-hedged; there could be more pain ahead.”

The Dow experienced its worst drop since February, while the Nasdaq Composite shed 4% and the S&P 500 finished with its longest losing streak since 2016 with a loss of over 3%.

The pain felt in the markets today wasn’t relegated to the technology sector as shares of aircraft manufacturer Boeing took a 4.58% hit today and over 5% the last five days. The drop comes as a surprise, particularly after the company reported a stronger-than-expected 737 deliveries during the month of September.

Nonetheless, some market experts posit that this latest market correction is a healthy sign for U.S. equities.

“The selloff is healthy,” said Joe Heider, president of Cirrus Wealth Management. “Since the market bottomed in March 2009, it’s been more than 10 years of growth stocks leading the way non-stop.”

As U.S. equities plunged, the benchmark 10-year Treasury note and 30-year note continued their upward trajectory. The 10-year yield ticked higher to 3.227 before settling to 3.191 at the market close, while the 30-year rose to 3.373.