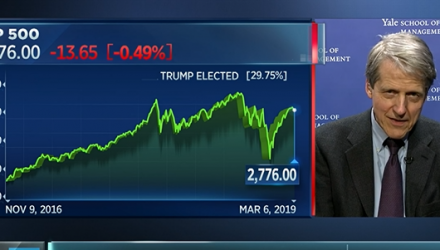 Yale’s Robert Shiller warns public debt worries could eventually offset the Trump effect. “A lot of people have that on their mind, and they think it’s got to turn soon. I’m kind of with that. You know, if people think that, they’re going to make it happen,” Shiller said Wednesday on CNBC’s “Trading Nation.”

A lot of data points out there one of those data points the record budget deficit. What is your perspective on that. How could that contribute to the end of the bull market here.

The question is whether it gets prominence in public attention as a as a source of troubles. And I don’t know. You know that attention to public debt has waxed and waned throughout history. You know Thomas Jefferson was against it then we used to be much more against the government incurring debt until now. Now it’s set record levels but people aren’t that worried about it. So summarize some of storyteller and you know the critics of Trump like OPEC or not AOC sorry are not criticizing for that we have this so-called new monetary theory that says it’s OK to run a deficit. So you know it’s not like it’s a debate it seems like the public is OK with it for now but I think in the back of their minds they’re not so sure.