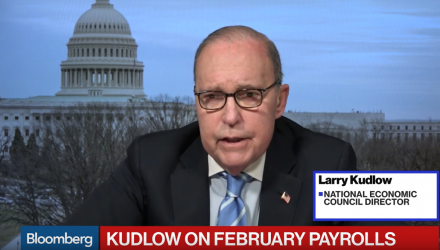 Following last Friday’s employment report that showed weaker-than-expected jobs creation, White House economic advisor Larry Kudlow was quick to stomp out fires in the capital markets, telling investors not to pay “any attention to it.”

In the following video, National Economic Council Director Larry Kudlow discusses the February jobs report, wage gains, stimulus from the European Central Bank, and whether the market plays into President Donald Trump’s approach to a trade deal with China. He speaks with Bloomberg’s Jonathan Ferro on “Bloomberg Markets: The Open.”