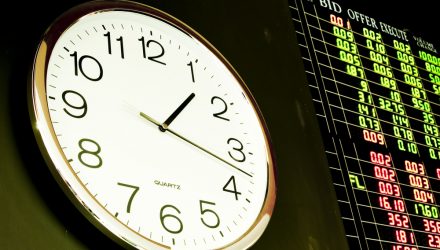 Fixed income investors are beginning to dump municipal bond exchange traded funds as the pullback in the muni market continues.

The iShares National Muni Bond ETF (NYSEArca: MUB), the largest muni-related ETF by assets, has declined 2.6% since its most recent high in late 2021.

Muni bond yields, which rise as prices drop, surged last week after the Federal Reserve indicated that it would begin hiking interest rates starting mid-March, which has weighed on the attractiveness of current outstanding debt. Yields on the highest-rated state and local bonds increased to 1.55% on Friday from Tuesday’s 1.34%, according to Refinitiv MMD data.

Meanwhile, the S&P Municipal Bond Index has decreased to -1.98% for 2022 through January 27 based on price changes and interest payments, marking the benchmark’s lowest year-to-date return in at least 16 years.

“The message is getting increasingly clear that the timeline is shifting ahead and the Fed is going to be quicker,” Yingchen Li, co-head of municipal research at Bank of America, told the WSJ.

The sudden disinterest in munis is a stark reversal from 2021, when income-minded investors dumped money into muni bond funds to ride out the Federal Reserve’s accommodative monetary policies and rebounding state economies.

Further adding to the friction in a traditionally stable $4 trillion muni market, there is a long-term shift in the way that bonds are bought and sold, with individual investors likely to sell off bonds at falling prices, whereas bond dealers are not willing to pick up the slack, which could contribute to greater spreads or losses.

Investors would traditionally buy and hold municipal bonds until maturity to collect on the interest payments that are often tax-free. However, more investors are getting their muni exposure through mutual funds or ETFs, which can be quickly sold. Mutual funds and ETFs that track munis are now even bigger than they were at the start of the pandemic.

Meanwhile, after the financial crisis, dealers have been less inclined to hold muni debt on their balance sheets, so they are less likely to buy when individual investors sell.

“We literally had the discussion: OK guys, we’ve had now a week of outflows, what’s our cash? Should we be taking that cash up?” said Lyle Fitterer, who manages about $6.5 billion in municipal bonds as co-head of the municipal bond team at Baird Advisors. “We do not want to be the people who are forced to sell into this environment.”