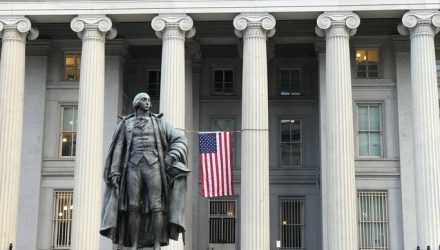 Treasury bond ETFs have been rallying as market volatility and growing concerns over the economy pushed yields on Treasury notes to new lows.

“The 30-year yield in itself is historic given that it is moving to massive lows but the curve inversion is typically the signal, one of the better signals you can get, that there is increased risk of recession,” Bank of America technical strategist Stephen Suttmeier said, according to CNBC.

The historic drop in long-term U.S. bond yields came after rates on the closely watched 10-year and 2-year Treasuries inverted. The inversion of this part of the yield curve has previously acted as an indicator of an economic recession.

“There isn’t a hard and fast signal for a future recession, but there is this correlation between curve inversions and recessions,” Brian Daingerfield, a macro strategist at NatWest Markets, told the Wall Street Journal. “That’s what the market has been discussing.”

Yields Have Been Steadily Falling

Yields, which fall as bond prices rise, have been steadily falling in recent weeks due to an escalating trade war between the U.S. and China, along with a weakening global outlook.

The U.S. government bond market overall is “definitely showing concern with the direction of the U.S. economy,” Sean Simko, head of fixed-income portfolio management at SEI, told the WSJ.

Meanwhile, the record low level for the 30-year yield reflects the muted inflation outlook, rising demand for safety and relatively high demand for U.S. government bonds while some developed market debt carry negative yields. Inflation is a particular threat to long-term bonds since it erodes the purchasing power of their fixed payments over the longer periods.