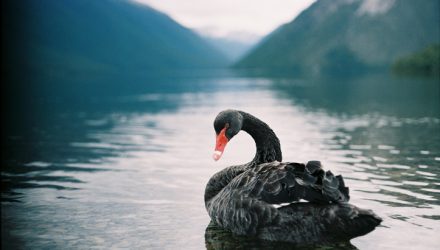 With SWAN, as Balchunas clarifies, “You’re just trying to limit your upside a little bit in order to limit your downside, hence the black swan name.”

SWAN has a solid 49 basis points, with a $112 million market cap. As far as the holdings, SWAN features some treasuries and call options.

Balchunas states the performance is more interesting, as it justifies the flows. SWAN is doing better than the S&P, which is odd, but it’s a result of treasuries and stocks both being up. The opposite occurs when both go down, which is the risk of this fund.

To explain a possible reason for the strong performance, Balchunas notes how “Downside protection is something a lot of people are thinking about. That’s probably why it’s getting some looks, plus the performance.”

When asked by Fu what qualifies as a black swan, Magoon brings up the odd environment in the last year, and black swan risks are historically looked at as market events that could impact the market more than a double-digit amount.

“Historically, these have come about every ten years or so, and you know we saw a mini one in the fourth quarter, where the S&P was down about 14% in a short period of time from November to Christmas Eve,” Magoon explains. “The Black Swan ETF was down just 4% during that time, a 10% difference in performance held up in that mini black swan.”

Balchunas brings the noted difference in today’s world, given how stocks and treasures can act. He asks Magoon what his thoughts are, given how dovish Fed policy can be when it comes to treasuries and stocks going down.

Magoon brings up the market history, and how it happened three times yearly going back to the 1920s. However, SWAN’s overall point is to play on the inverse to the low correlation of US treasuries and the S&P during risk-off events.

Related: An ETF to Consider if the U.S.-China Trade War Triggers a Black Swan Event

“Money flies to the treasury area. The S&P gets beat up, and that acts as a natural hedge,” Magoon explains. “We’ve put it together in a single product, and that’s why we’ve seen several dips, three pretty good-sized dips, since the Black Swan launched in November 6 of last year, where SWAN has held up nicely.”

When asked how advisors should use SWAN, Magoon believes it fits in the core portion of an advisor’s portfolio. With a possible bubble forming in low-volatility ETFs, SWAN serves as an alternative that doesn’t just own stocks but has bonds and S&P exposure.

“We think that inverse correlation is a better mousetrap, and a better play when it comes to trying to have a lower volatility equity exposure in an allocation.”