You are at:Home»Fixed Income Channel»Fed Fuels Sudden Rush Back Into Fixed-Income ETFs 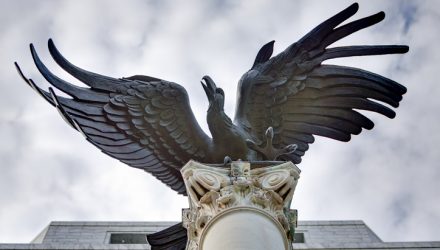 Bond ETFs are experiencing big inflows as the Federal Reserve shifts away from the rate hikes of last year and hints at interest rate cuts ahead.

Mutual funds and ETFs that track bonds just saw $12.1 billion of inflows for the week ended July 17, which marked the 28th consecutive week of inflows, the Wall Street Journal reports.

So far this year, bond funds have brought in $254 billion and were on pace for a record $455 billion on an annualized basis in 2019. To put this in perspective, bond funds accumulated $1.7 billion in inflows over the past decade, according to a Bank of America Merrill Lynch analysis of EPFR Global data.

Among the most popular ETF plays of 2019, the iShares 7-10 Year Treasury Bond ETF (NASDAQ: IEF) saw $5.6 billion in net inflows and the iShares MBS ETF (NasdaqGM: MBB) attracted $5.3 billion in inflows, according to ETFdb data.

Fueling the sudden rush back into fixed-income assets, the Federal Reserve is widely expected to cut interest rates for the first time in a decade next week, and investors anticipate officials could continue to lower borrowing costs this year.

“There’s a lot of uncertainty over how many times the Fed will cut rates,” said Jason Ware, managing director and head of institutional trading at broker-dealer 280 Securities. “And when there’s uncertainty, many investors will park their money in something that’s perceived as safer.”

Bank of America Merrill Lynch pointed out that fund managers saw long U.S. Treasuries was the “most crowded trade” for the second consecutive month.

Fixed-income assets were also attracting attention for their more conservative nature to help offset risk in other areas of the market. Many anticipate global growth to slow, which have pushed S&P 500 companies to cut forecasts.

BAML also pointed out that mutual funds and ETFs tracking U.S. equities have suffered through $45.5 billion in outflows year-to-date as investors shifted over to bonds. However, the hopes of rising rate cuts have helped stem the hemorrhaging in equity funds, with $22 billion flowing back into U.S. equity funds over the past six weeks.