You are at:Home»Fixed Income Channel»Fed Chair Sees ‘Growth Moderating Ahead’ 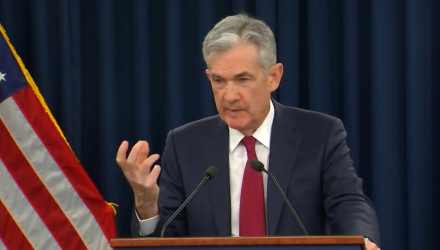 Despite the dovish tones, Powell did manage to sing the praises of the current economy. Backed by data showing solid growth and a robust labor market, Powell mentioned that the “U.S. economy has continued to perform well” and “signs of a more robust economy proved accurate.”

However, Powell is quick to point that “there’s a mood of concern going forward” from businesses that the Fed has been speaking with regarding the current state of the economy.

Following Powell’s speech, the Dow Jones Industrial Average fell by over 400 points after starting the session up over 200 points. The S&P 500 as well as the Nasdaq Composite followed the Dow into the red 40 points and 150 points, respectively.

As has been the norm, U.S. President Donald Trump has been throwing barbs at the Fed following a sharp decline in the markets. Powell said “political considerations have played no real part in our decisions regarding monetary policy.”

Furthermore, he reiterated that the Fed will “do our jobs the way we’ve always done.”