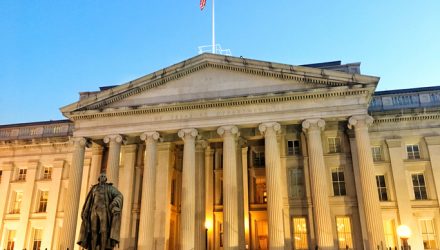 Fixed-income ETF investors have been diving back into Treasury bonds and related exchange traded funds, with Treasury prices pushing higher despite the Federal Reserve’s indication of only a single rate adjustment.

Long-term Treasury bond ETFs have been gaining traction among fixed-income investors. The iShares 20+ Year Treasury Bond ETF (NASDAQ: TLT) attracted $829 million in net inflows over the past week and brought in $4.9 billion so far this year, according to ETFdb data.

TLT also advanced 1.8% on Thursday after jumping 0.8% in the previous session.

However, the idea of persistently low inflation could force the Fed to further ease its monetary policy, fueling gains in the bond market and driving bond yields sharply lower, with yields on benchmark 10-year Treasury bonds now at 1.89%.

The bond market is basically implying the Fed may be taking the wrong stance by not committing to a long-running rate-cutting cycle. Looking ahead, options traders at betting on a 64% chance the Fed could cut interest rates in its upcoming September meeting.

“The market was already starting to say ‘we don’t believe everything is going to be perfectly fine and this is only going to be a 25 basis point cut,’” John Briggs, head of strategy at NatWest Markets, told CNBC. “Follow that up with weaker than expected ISM, and it’s only gaining momentum on the idea that Powell will have to ease anyway.”

“If we get a weak payroll number the market might just run him [Powell] off,” Briggs added.

Related: Pair of Junk Bond ETFs Attract $1.5B Net Inflows In Past Week

Bond investors were also the most bullish on U.S. longer-dated government bonds since late May ahead of the Federal Reserve meeting, Reuters reported.

According to a weekly J.P. Morgan survey, the share of investors who were “long” or held more longer-dated Treasuries than their portfolio benchmarks exceeded those investors were “short” or held fewer longer-term government debt issues than their benchmarks by 13 percentage points. The results were the highest level of net longs since May 28.