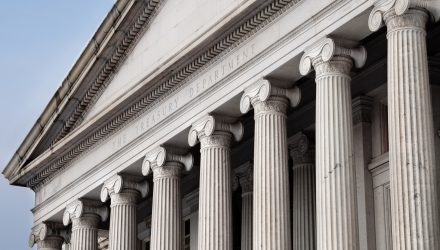 ETF investors are hedging their bets with long-term Treasury bonds in a worst case scenario where an escalating trade war could rile markets.

Investors continue to pile into ETFs that cover areas that traditionally do well during low-rate environments, like long-term Treasuries, along with real estate investment trusts and utilities, Bloomberg reports.

For example, the iShares 20+ Year Treasury Bond ETF (NASDAQ: TLT) was among the most popular plays in recent weeks. TLT gathered $514.1 million in net inflows over the past week and experienced $1.7 billion in net inflows over the past month, according to XTF data. Long-term bond funds are on pace for their fourth consecutive month of inflows and the best month since April.

It’s “indicative of this almost irrational fear of risk, and the irony is TLT is very risky,” Mark Hackett, chief of investment research at Nationwide Funds Group, told Bloomberg. “The way that duration works is if you have a spike in rates, you could lose capital at a pretty high rate.”

Chris Zaccarelli, the chief investment officer at Independence Advisor Alliance, also warned that it is a risky bet that yields will stay low. As warnings of trade wars mount, some investors are speculating the scuffle could force the Federal Reserve to push back plans on future rate hikes.