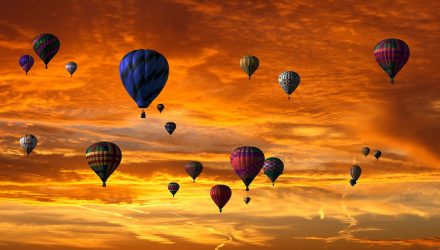 With inflation on the rise, investors may consider ETF themes that may help diminish the negative effects and diversify an investment portfolio.

U.S. inflation accelerated in May to the fastest pace in over six year, reports Katia Dmitrieva for Bloomberg. The consumer price index was up 0.2% from the previous month and 2.8% year-over-year, its biggest annual gain since February 2012.

The data “provide further evidence that inflation is moving towards the Fed’s objective,” and the central bank will continue on its gradual rate-hike path, Kevin Cummins, an economist at NatWest Markets, told Bloomberg. The pay figures are “a reminder that you don’t need to necessarily get more aggressive in your approach because wages haven’t accelerated as much as they have in the past.”

The Fed’s preferred gauge of inflation met the central bank’s 2% goal during March and April – the gauge typically runs slightly below the Labor Department’s CPI.

As inflation begin to pick up on a growing economy with an 18-year low in unemployment and steadily rising wages, investors may want to think about ways to protect their investments against lower real returns. Consequently, one should consider allocations to assets expected to perform well when inflationary pressures rise.

For starters, the IQ Real Return ETF (NYSEArca: CPI) invests in a number of various ETFs with the objective of providing a hedge against inflation or provides a multi-asset inflation hedging approach. Specifically, the ETF includes exposure to short-term Treasuries, short contracts on Treasury bonds, the S&P 500 and Russell 2000.