You are at:Home»Equity ETFs»Dow Rallies on Positive Earnings, Rises Over 300 Points 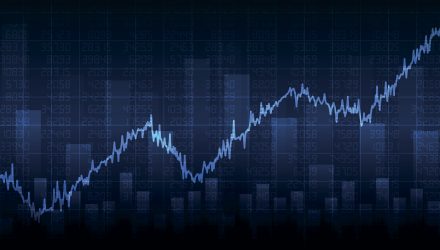 Today’s rise in the Dow follows as investors have been seeing nothing, but a sea of red lately with the index falling over 1,300 points last week. The markets could get an additional boost when Netflix reports its earnings later today.

“Our best assessment is that 3Q international net adds will be in line with management’s guidance of 4.4M, which is in line with our estimate,” said Deutsche Bank analyst Bryan Kraft, in a note. “However, based on investor feedback gathered by DB, the buyside’s expectations are a bit higher, in the high 4M range, at least partly due to a view that management has guided conservatively.”

Last week’s loss came just a couple of weeks after Federal Reserve Chairman Jerome Powell praised the growth of the economy and not long after the S&P 500 reached historic highs, which signals that the extended bull run may finally be coming to a close. However, other analysts feel the markets were simply on course for a correction.

U.S. Treasury notes ticked higher on Tuesday after the Labor Department revealed that the number of job openings in the United States reached a series high of 7.1 million in August.

“The report has been trending higher for a long time now, so I think the markets got immune to a lot of these prints, but I’d like to think the overall data is still fantastic, because the quit rate was higher in the low-wage categories such as leisure and hospitality,” said Thierry Wizman, global interest rates and currencies strategist at Macquarie Group.