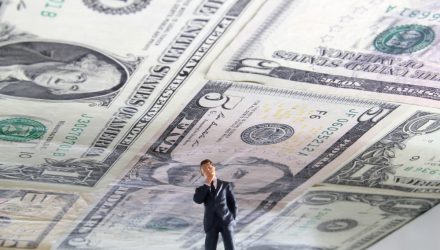 As the political brinkmanship on Capital Hill escalated ahead of the U.S. debt ceiling, Treasury bonds and related exchange traded funds were beginning to lose some of their traditional safe haven appeal.

For instance, the iShares 20+ Year Treasury Bond ETF (NasdaqGS: TLT) was among the most hated ETFs over the past month, experiencing $1.3 billion in asset outflows, according to ETF Database data.

Despite rebounding over the past few days, TLT is still down 2.9% over the past month and 7.7% lower year-to-date. The fund also recently tested its long-term support at the 200-day simple moving average after falling off over September.

U.S. Treasuries have been a global staple for their depth and liquidity, with many investors relying on the safe haven asset because of the belief that the United States government will never default on its debt. However, this belief is being tested as the Treasury increasingly hits its borrowing limits and a greatly divided U.S. Congress makes a simple vote on raising the debt a political tug of war.

While the recent October default has been averted, the deadlock will be back by early December. This unending politicization of the debt ceiling could continue to weigh on the perceived safety of Treasury bonds and push investors toward alternative safe haven assets, particularly in the Eurozone.

International Monetary Fund data revealed that the share of dollar reserves held by central banks declined to a 25-year low of 59% by the end of 2020 and is hovering near those levels.

Investors have been selling Treasuries while buying other safe haven bonds, such as Japanese and German government bonds, according to the Institute of International Finance (IIF).

“What matters – if you are a safe haven asset that Treasuries purport to be – is that you get inflows when times are tough and risk appetite is low,” IIF chief economist Robin Brooks told Reuters. “That didn’t happen last year, but it did very noticeably for German Bunds.”